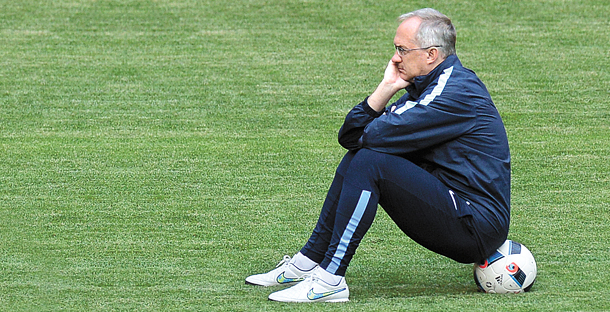 Uli Stielike, coach of the Korean national football team, has chosen to bring back Lee Chung-yong of Crystal Palace to the roster after the midfielder has steadily seen more playing time with his English club in recent months. [NEWSIS]

Lee Chung-yong, the “Blue Dragon,” might still have some fire left in him.

Lee, who was once named one of the top 50 rising stars in football by The Times of London in 2009, had a lackluster season last year, spending most of his time with English Premier League club Crystal Palace on the bench and scoring a meager one goal in just 13 games.

Out of sight, out of mind, Korea’s national team manager Uli Stielike without hesitation excluded Lee from the roster for the European friendlies earlier this year in June.

But after the new season began this month, Lee seems to be a changed man. He is so far making more frequent appearances on the pitch, even during the preseason, and he looks lighter on his feet than ever. This undoubtedly pleased Stielike, and now, the 28-year-old midfielder is back on the national team roster as they head off to the final round of the Asian qualifiers for the 2018 FIFA World Cup. 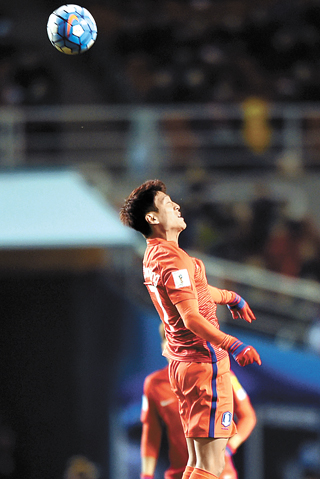 Lee Chung-yong goes for a header during the FIFA World Cup qualifier match against Lebanon in March. [NEWSIS]

The first match of the Asian qualifiers’ final round is set for this Thursday at Seoul World Cup Stadium in western Seoul, and even though they face China at home, as many as 30,000 Chinese football fans are expected to attend. The pressure is, thus, high for the Korean squad, who can expect big cheers - and jeers - from the stand on their own home turf.

In the midst of it all, Lee is marking his proud return to the national team after six months off the roster. His troubles, though, began much earlier, in last January, when he fractured his shin during the 2015 AFC Asian Cup.

After the injury, Lee’s worth plummeted along with his playing time. When he was traded to Crystal Palace in February 2015 from the Bolton Wanderers, his transfer fee was reportedly about 1 million pounds ($1.3 million), just a tenth of what he was worth in 2012 and even lower than the 2.2 million pounds he was paid when he first left the K-League in 2009.

Even more distressing was his position at the new club. Out of the 13 games he played for Crystal Palace last year, he only started in four. Lee fell out of favor with manager Alan Pardew after publicly criticizing him.

“Pardew is very smart in training, but he’s too hot tempered in matches, so he even forgets how many substitutes are left,” Lee said last April. “Pardew also made me train as a starter for the whole week and decided to leave me out on match day, even as an injured player who had not trained all week, recovered and felt okay on the day. That was absurd.

“I have a contract with Crystal Palace until 2018, but I don’t have any reason to stay here next season,” Lee continued. “I think I should try to talk to other clubs. Pardew runs the team with a very short-term vision.”

The statement, which seemed to be Lee’s way of venting his anger and frustration for lack of playing time, backfired, and he was fined 30,000 pounds ($ 39,307). The midfielder was also shunned by his manager in subsequent matches after his remarks went viral.

To make matters worse, Lee was also neglected by the national team. Coach Stielike was adamant about his policy that he would not take anyone who sees little to no playing time at their respective clubs. “If Lee cannot see any playing time, he will not make the cut,” Stielike said.

But Lee, who seemed to have been abandoned by his managers, was reluctant to give up.

“Hopefully, I will get some more minutes and get the chance to show what I can do,” he told the Croydon Advertiser before the start of the season last month. “Last season, I didn’t get too many minutes, so I hope to play more this season. We have a lot of good players here, and for me, it is important to show every day what I can do and take my chance when it comes.”

And when there is a will, there is a way. Lee ground his teeth during the offseason and started out this year during the preseason seeing a solid amount of playing time. Earlier this month during the English Premier League season opening match against West Bromwich, he played for 66 minutes.

“Chung-yong Lee played in a central attacking role and created Crystal Palace’s best chance with a through-ball to Wilfried Zaha that the winger missed,” ESPN FC said about the match. In the next game against Tottenham Hotspur, Lee played for 82 minutes, giving Stielike more reason to take him back on the national team.

Since then, Lee has seen consistent playing time this season. During the team’s third game of the season against AFC Bournemouth on Saturday in London, where they tied 1-1, Lee was the first pick to be substituted into the match, alongside his teammate Wilfried Zaha, when Crystal Palace was in a pinch, behind 1-0.

It was this game that turned Stielike. “He played through the preseason and started two Premier League matches,” the coach said. “There is no reason for me not to include a player who is starting at the Premier League.”

Lee is without a doubt one of the stars in Korean football. He played in 72 matches for the senior national team while piling in seven goals. For this season, his presence on the pitch in the upcoming qualifiers is expected to boost the team’s morale.

The match against China on Thursday will kick off at 8 p.m.