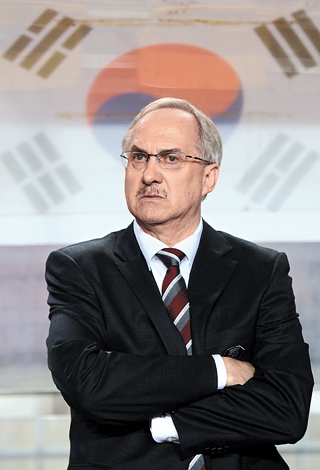 Uli Stielike, the manager of the Korean national football team, before the start of the third match of the Asian qualifiers for the 2018 World Cup last Thursday. Stielike and the Korean football team will meet their toughest challenge yet today in their campaign to the ninth consecutive World Cup as they play against Iran on the road. [NEWSIS]

Just after a victory over Qatar by a narrow margin of 3-2 on Thursday, the Korean national football team will be taking on the toughest challenge yet in the final round of the Asian qualifiers for the 2018 World Cup in Iran today. The match takes place at none other than the Azadi Stadium in Tehran, a venue well known as a stadium where visitors go to suffer. While the Korean team will face an uphill challenge against Iran, the game may well give the team an away victory and add more momentum to its campaign for a ninth straight World Cup appearance.

According to the FIFA Rankings, the Iranian national team is ranked 37th, 10 steps above the Korean team, which is ranked 47th. But the difference in standings is the least of Uli Stielike and the national team’s concerns. The Iranians hold a tactical advantage as the game today is played at their home turf. Added to the home advantage, Iran is far better than the teams Korea has met thus far; China, Syria and Qatar, against whom Korea barely pulled off a win or tied. In its head-to-head record, Iran has had 12 wins, seven draws and nine losses against Korea.

Carlos Queiroz, the skipper of the Iranian national team, has convened the key members of the country in anticipation for today’s match, including those in Europe as well as the veterans of the team. Karim Ansarifard, Reza Ghoochannejhad and Andranik Teymourian are some of the notable names spotted in the Iranian roster for today’s game. In addition, Sardar Azmoun and Masoud Shojaei are familiar faces for Korean players. Some may even still remember Azmoun netting the game winner in 2014 during a friendly between Iran and Korea. The Iranian was only 19 years old back then.

But more so than the players, the most intimating name of all on the Iranian squad is the manager himself.

Korean fans and players may recall the match during the final round of qualifiers for the Brazil World Cup that took place on June 2013, when Iran defeated Korea 1-0 at the Ulsan Munsu Stadium then and after the win, Queiroz made a raised fist gesture that angered players and staff, almost leading to a physical brawl between the two teams. This incident made Iran and Queiroz public enemy No. 1 for the Korean football team. And he will not shy from openly expressing his animosity towards the Korean team this time around. The Iranian manager said, in the lead-up to today’s game, that he will make sure his team advances to the World Cup for the second straight time no matter what.

And the situation is in Queiroz’s favor. In terms of the location, the Azadi Stadium is 1,274 meters (4,180 feet) above sea level. That altitude will wear the visitors out quickly. “You get out of breath just by standing in the stadium,” said one of the players, adding that with the atmospheric pressure lower than at sea level, the ball seems to travel faster to cause further distress for the visitors.

The Iranian players, who grew up in such conditions, don’t feel the burn. The Korean team has played at the Azadi Stadium six times and has yet to claim a win there.

Stielike is well aware of these factors, but despite the odds stacked against his team, he hopes to come out with a different result than before. “It is about time we bring home a win from Tehran,” he said shortly after the group drawing for the final round in April.

His determination to crush Iran at its home turf was apparent during the practice sessions in the lead up to today’s match. On Saturday, the Korean team arrived at Tehran in the morning and had its first practice session in the afternoon. Normally, the squad takes things easy on the first day, spending the majority of the session recuperating from travelling. But Stielike pushed the team hard, concentrating mainly on offense.

“We will have to play offensive football against Iran,” said the German-born manager, adding that the key term for Saturday’s practice was “flank attack.”

During the practice, the team was seen doing crossing drills. Fullbacks and side midfielders repeatedly sent crosses from either side of the flank near the opposing goals. The crux of the drill was to send accurate cross and for the center forwards to find the most advantageous position from which to head the ball in.

What Stielike was getting at is simple - to attack Iran where it is the most vulnerable. “Iranians tend to pack the middle as tight as possible,” said Kim Bo-kyung, who has played against Iran in the past, including while playing for the Korean U-23 team. “We need to move quick at the side and utilize attacking patterns that go from the either end of the pitch. We have players like Son Heung-min and Ji Dong-won that can nudge in accurate crosses from either side. We also have Suk Hyun-jun or Kim Shin-wook that can receive the ball in the middle and connect it to a goal.”

Korea is currently ranked second in Group A after Thursday’s win over Qatar. While Iran and Korea have seven points with two wins and a draw, Iran is ahead of Korea in goal difference.