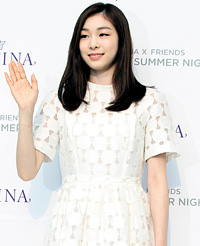 Kim Yuna to be inducted to Korean Hall of Fame

Korean figure skating star Kim Yuna will be inducted to Korean sports Hall of Fame, according to the Korean Olympic Committee (KOC).

The KOC announced on Tuesday that Kim, who won a gold medal in women’s figure skating from the 2010 Vancouver Winter Games and a silver in the subsequent Olympics in Sochi, has been selected as this year’s “Sports Hero.”

The selection committee of the KOC convened for the second time on Oct. 5 and evaluated candidates on their contribution to the betterment of domestic sports. The committee selected six candidates based on recommendations by the public as well as sports reporters and sports-related organizations in the country. The final candidates included late sports commentator Lee Kil-yong, golf Hall of Famer Pak Se-ri, former Major League Baseball pitcher Park Chan-ho and late professional wrestler Kim Il.

Oh Seung-hwan is candidate for Reliever of the Year Award

Oh Seung-hwan, closer for the St. Louis Cardinals in the Major League, was selected as one of the candidates for this year’s Trevor Hoffman National League Reliever of the Year Award, an annual honor given to the best relief pitcher in the National League (NL).

MLB.com announced Sunday, local time, eight relievers from the NL as contenders for the accolade. Along with Oh, Kenley Jansen of the Los Angeles Dodgers, Mark Melancon of the Washington Nationals, Tyler Thornburg of the Milwaukee Brewers, A.J. Ramos of the Miami Marlins, Addison Reed and Jeurys Familia of the New York Mets and Aroldis Chapman of the Chicago Cubs.

The award will be presented before Game 4 of the World Series, which is scheduled for Oct. 30.