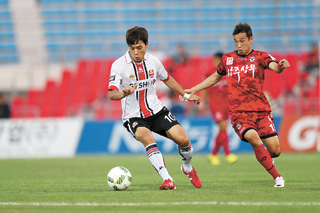 The LG Twins will travel down to Changwon to face the NC Dinos for the third round of this year’s Korea Baseball Organization (KBO) postseason.

At today’s game between the Twins and the Dinos, Eric Thames, a slugger who hit more than 40 homers in two straight seasons and was last year’s MVP, will be absent from the starting line-up. Thames was caught driving under the influence and was barred by the KBO on Sept. 30 from the first game of the postseason, which for the Dinos is the game today since they had the bye for finishing second in the season.

In his stead, it is likely that veteran infielder Cho Young-hun will be playing the first baseman. Throughout the season, Kim Kyung-moon, the Dinos’ skipper, mobilized Cho on first base in the absence of Thames. Cho was seen playing the position during the Dinos’ pickup game in preparation for the postseason. In the 12th year of his career, the 33-year-old has seen his career peak this season, batting .335 with five home runs and 35 runs batted in. His batting average with runners in scoring position was .339, and his pinch-hitting batting average was .333, making his batting average in virtually every category above .300.

After failing to advance to the finals of this year’s Asian Champions League (ACL), FC Seoul now focuses on taking the title of the K-League Classic.

Seoul, ranked second in the league now, has the opportunity to take first place in the league standings. In the second round of the split round, a system used as a playoff in the K-League Classic, Seoul has 18 wins, six draws and 10 losses, tied in points with Jeonbuk Hyundai Motors, first in the league. In terms of goals scored, Jeonbuk is ahead of Seoul by two goals. While the chance for Seoul to take the league title came at the expense of a recent bribery controversy for Jeonbuk, after which Jeonbuk was docked nine points, Seoul is determined not to let this chance slip out its hands, as unpleasant as it might be.

Seoul takes on Sangju Sangmu FC this Saturday at home. While Seoul is on a three-game winning streak in the league, Sangju failed to register any wins in the past six games.

The 2016-17 season of the Korean Basketball League (KBL) has finally arrived this weekend.

The Thunders, since their inception, have claimed two KBL championship titles. Joo Hee-jung, one of the oldest players in the entire KBL league, is still playing with the Thunders. Joo has played more than 1,000 KBL games in his career, which spans almost two decades, and although it is likely that he will not be seeing much playing time on the court, largely due to his age, Joo is still considered the franchise star.

Against Joo and the Thunders’ guards, Yang Dong-geun, a veteran guard and franchise star of the Phoebus, will be putting up a show.