FC Seoul comes out on top in K-League

FC Seoul comes out on top in K-League 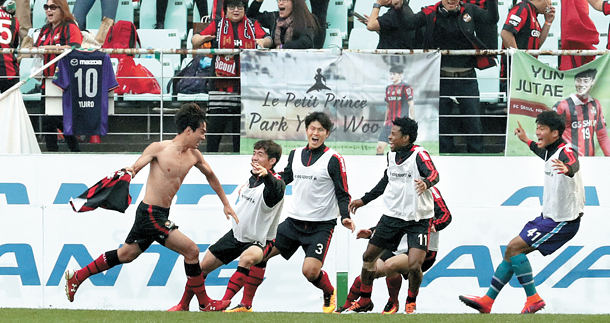 FC Seoul’s Park Chu-young, far left, celebrates after scoring the game winner in the second half of the K-League Classic match against Jeonbuk Hyundai Motors on Sunday. [ILGAN SPORTS]

In a K-League Classic match-up characterized as a David vs. Goliath battle, the nearly undefeated Jeonbuk Hyundai Motors fell to FC Seoul 1-0 on Sunday, closing a dramatic season for Korean football.

Sunday’s duel between Jeonbuk and Seoul at Jeonju World Cup Stadium, the home turf of Jeonbuk, was essentially a championship match for this year’s K-League Classic season. For Jeonbuk, much was at stake as Sunday’s win would ensure their dominance in the league - it would mark their third consecutive K-League title. For Seoul, victory would mean an opportunity to get even with Jeonbuk, who ousted them from this year’s Asian Champions League in the semifinals. It would also give them their first league trophy in four years.

At the end of the day, Seoul got its revenge and came out with their heads held high and a trophy in their hands, denying Jeonbuk’s title streak in the league.

Jeonbuk and Seoul went into the match ranked first and second in the league standings, tied in terms of points but with Jeonbuk leading by goal difference. This meant Seoul had to take three points by taking down Jeonbuk, while Jeonbuk would win the title as long as they kept the match to a draw.

Jeonbuk opted for a 4-5-1 formation with 1.97-meter (6-foot-5) forward Kim Shin-wook as their target man. Kim Bo-kyung took up the role of central midfielder to control the pace of the game for Jeonbuk.

Seoul went with a 4-3-3 formation, putting Dejan Damjanovic, Yun Il-lok and Yoon Seung-won up in front, later mobilizing Park Chu-young to replace Yoon in the first half.

It was Park who ended up breaking the scoreless deadlock up through the second half to net the decisive goal.

Severing Jeonbuk’s offensive effort on their side of the pitch, Seoul went on a counterattack and Yun, finding Park up front, split Jeonbuk’s defenders with a through pass. Upon receiving the ball, Park quickly took a shot and drilled it past Jeonbuk goalie Kwoun Sun-tae to score his 10th goal of the season.

After Park scored in the 58th minute, Jeonbuk tried to bring back the momentum of the match by putting in veteran striker Lee Dong-gook in place of Leonardo Rodrigues Pereira, reinforcing their offensive line.

But as anxious as they were, it was not easy for Jeonbuk to net an equalizer. Although the team outshot Seoul 12 to six, it was unable to capitalize on given opportunities. Most of their shot attempts went wide with only three of them being on target, matching Seoul’s number.

Still, Jeonbuk relentlessly attacked and came close to tying the game, but attempts by Park Won-jae and Lee Jae-sung both missed the net.

Seoul managed to keep their one-goal lead, and after the whistle blew at the 90th minute, the club could celebrate their title, and the team’s manager, Hwang Sun-hong, who took the helm in June after former skipper Choi Yong-soo left mid-season, could say he had proven himself a worthy leader.

Elsewhere in the K-League Classic, Suwon FC, which was spending its first season in the top-tier league, was relegated back to the second-tier K-League Challenge after losing 1-0 to Incheon United FC on Saturday.

Jung Jo-gook of Gwangju FC claimed the top-scorer honor of the season, marking his first scoring title since he turned pro in 2003. The veteran striker’s enjoyed a second wind for his career this year, netting a career-high 20 goals.