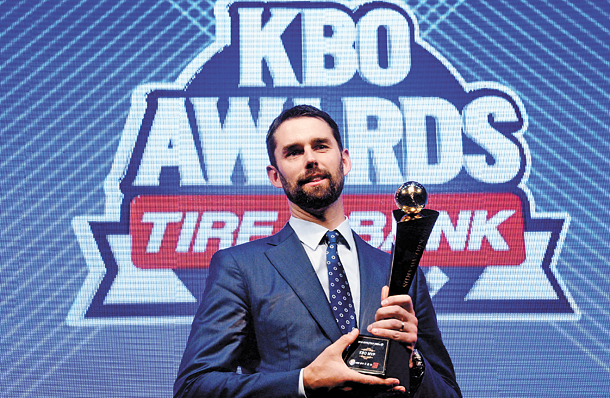 Dustin Nippert of the Doosan Bears, the pennant winners as well as Korean Series champions, poses after winning the KBO MVP award on Monday in Seoul. This was Nippert’s first MVP honor since he joined the KBO. [NEWSIS]

Dustin Nippert, a starting pitcher for the Doosan Bears, who swept both the pennant and the Korean Series this year, finally captured the Most Valuable Player (MVP) award, an honor that has eluded him since he donned the Doosan uniform.

Prevailing speculation in the lead up to the Korea Baseball Organization (KBO) award ceremony, which took place on Monday in southern Seoul, was that the competition for the MVP award would be a showdown between a sword and a shield, with foreign pitcher Nippert and homegrown slugger Choi Hyoung-woo of the Samsung Lions vying for the top title of the league. Nippert and Choi both enjoyed the peaks of their careers this season.

Nippert, a 35-year-old righty in his sixth year here, showed the most dominant form on the mound, and the stats speak for themselves. Throughout the season, pitching in 167 and 2/3 innings, the American pitcher captured 22 wins, more than any other pitchers in the league, while losing only three games. This is the most wins he’s earned since he joined the league in 2011. His winning percentage (WPCT) stood at an astonishing .880, the top of the league, and his earned run average was the lowest of all KBO pitchers at 2.95.

While Nippert enjoyed the best stint in Korea since he came aboard, Choi, the Lions franchise star, remained rock-solid on the plate in his most prolific year.

Before the MVP award recipient was unveiled, the two players were honored for their achievements. While Nippert packed home the KBO ERA title, wins title and WPCT title, Choi pocketed titles in RBI, batting average (BA) and hits, taking triple-crowns for themselves by nabbing three different titles each in pitching and in hitting.

With trophies in hands for the first time since he arrived in Korea, Nippert expressed his appreciation to his teammates and said, “Honestly I just feel like Michael, Won-jun, Hee-kwan can be up here right now. I feel really blessed.”

When asked about which of the three titles he was the most pleased about, Nippert still gave credit to his teammates and answered, “I got these title because of my teammates. The bullpen was great. All these awards are great but baseball is a team sport. For me, the Korean Series title is the best.”

More impressive than the numbers he’s put up throughout the season was the fact that Nippert spent the season productive despite it being a hit-happy year.

In team BA, the league saw .290, the highest in the past two decades. In comparison, the league ERA was 5.17, the second worst number during the same period. All in all, hitters together belted out 1,483 home runs.

However, this did not stop Nippert from receiving the highest honor of the league. The right-hander collecting 642 points out of 816 total, 112 points more than Choi. Nippert also edged other candidates such as Kim Tae-kyun of the Hanwha Eagles, Eric Thames of the NC Dinos and Choi Jeong of the SK Wyverns along the way.

“I don’t know how I feel,” said Nippert, looking emotionally overwhelmed. “I did not think this would happen. Hyoug-woo had a great season, a lot of hitters had a great season. And for a pitcher to be up here, I feel like it’s a testament to my teammates. They scored the runs and played defense behind me. I just want to say thank you especially to my teammates, especially to Yang Eui-ji [Bears’ catcher]. Thank you.”

He added, “Honestly, I just think it’s for my teammate and how lucky I am, I get to play sports for living and get to have fun. Thank you to the fans. Your support means a lot.”

Other than Nippert and Choi, Shin Jae-young, a pitcher from the Nexen Heroes, claimed the Rookie of the Year title, after leading all the rookies with 15 wins and 3.90 ERA.