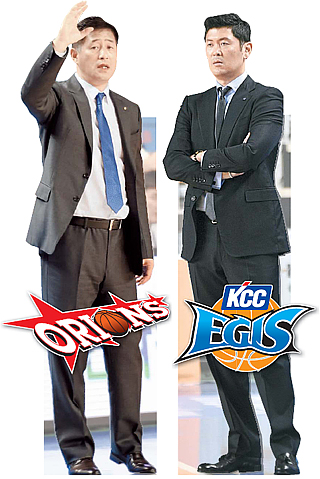 Only a month has passed since the 2016-17 Korean Basketball League season began, so it’s still too early to tell where the teams will be by the end of the season. But two of last season’s finalists, the Goyang Orion Orions and Jeonju KCC Egis, are already experiencing a total turnaround with the former enjoying their stint at the top of the league while the latter are unable to find proper footing in the league where they claimed a trophy just a few months ago.

Choo Il-seung and Choo Seung-kyun stood on the sidelines during the final series of the KBL last season. Choo Il-seung, the Orions skipper, was the underdog then, seeded third after the regular season, while Choo Seung-kyun and the Egis were the favorites to win after claiming the regular season trophy. Still, Choo Il-seung and the Orions overcame the odds and finished the series in March with the championship trophy in their hands.

During the showdown between the two on the Egis’s home turf on Sunday in Jeonju, North Jeolla, the Orions beat the Egis 83-72, a repeat of last year’s championship series. It was the Orions’ second straight win, putting them in the lead with nine wins and two losses, while the Egis marked their fourth loss and are now at the bottom of the standings with two wins and 10 losses.

Essentially, every part of the wheel clicked for the Orions. Aaron Haynes led the game with a double-double, putting up 27 points on the board while grabbing 17 rebounds. He also led the team in assists, with seven total. O’Darien Bassett, another import, helped out with eight points and two assists. While the imports were at work, Korean players also played their part in the game with forward Kim Dong-uk draining four short jumpers, one three-pointer and three free throws to tally 14 points total. Lee Seung-hyun, a power forward and last year’s championship series MVP, also did his share, scoring six points while grabbing three rebounds.

And the scene from Sunday was essentially how the season has been turning out for the Orions, with foreign and Korean players working together to form a formidable group. Haynes is ranked second in the league in scoring, averaging 26.55 points per game, while Bassett is at 11th with 17.27 points per game. Both Kim and Lee, national team forwards, are also averaging over 10 points per game. Other than Bassett, a new member of the team, all were key players from last year and their presence on the court has not diminished since. And after standing their ground on the court again this year, some say Choo may have started “Orions’ dynasty.”

“They played two games in just two days, which must have been exhausting,” said their head coach Choo after the match on Sunday. “But they came out and played hard.” 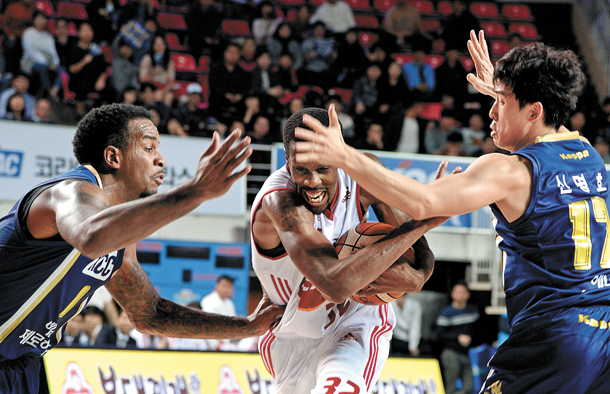 Goyang Orion Orions’ Aaron Haynes is guarded by Jeonju KCC Egis’ defenders during their game on Sunday in Jeonju. The defending champions Orions, ranked first in the league at the moment, defeated the Egis, ranked 10th, 83-72. [NEWSIS]

Just a day before on Saturday, the Orions had taken down the Seoul SK Knights 95-86.

Meanwhile, Choo Seung-kyun has had to contend with a litany of players’ injuries.

The Egis, who won the regular season title last year, are down a few key players at the moment, including Ha Seung-jin, former NBA player and the tallest player in the KBL at 2.21 meters (7 feet 3 inches), and Andre Emmett, who amassed 1,389 points last season, the most points scored by a single player during the season. Both Ha and Emmett are recovering from injuries.

After officially taking the helm last year, Choo Seung-kyun silenced critics who questioned the depth of his experience as a head coach by winning the regular season title, an honor that eluded the Egis for 16 years. After an impressive run last season, the skipper managed to keep Emmett on the team, which meant the Egis’ firepower was still there this year.

But after playing just in two games since the opening of the season, Emmett has been sidelined due to groin injury. To make matters worse, Ha, a center whose presence under the basket intimidates most, had to undergo ankle surgery and is on the mend. It is likely Ha will be out for the season. Chon Tae-poong, a point guard naturalized from the United States, is also out for the season due to an elbow injury.

Without these key players, Choo Seung-kyun may have met the biggest challenge of his managerial career yet. Although young talents such as Song Kyo-chang, a 20-year-old, try to make a difference, there is a limit to how much they can do. Will Choo Seung-kyun witness a shift in his situation when Emmett returns this week? Fans will have to see if the import still has some gas left in his tank despite a month-long absence.