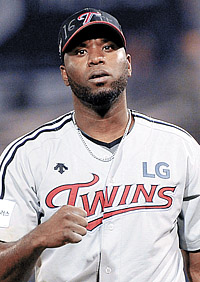 LG Twins fill up their foreign player quota for next season

The Korea Baseball Organization’s LG Twins said Wednesday that they have renewed the contracts of pitcher Henry Sosa and infielder Luis Jimenez for a reported value of $900,000 and $1 million.

Along with David Huff, whom the Twins re-signed the previous day, the team has now filled up their quota for foreign players. Each team in the Korean professional baseball league can have up to three players from abroad, with at least one position player.

Sosa has pitched in 33 games for the Twins this year, recording a 5.16 earned run average with 10 wins and nine losses. He’s produced 48 wins total during the five years he has spent in the KBO.

The Doosan Bears’ Lee Yong-chan, who recently went through surgery on his right elbow, was taken off the Korean national team roster for the upcoming World Baseball Classic, the Korea Baseball Organization announced Wednesday.

The event takes place next March at the Gocheok Sky Dome in western Seoul, and Lee was part of the final roster announced by the KBO on Nov. 10. The following week, Lee reportedly underwent surgery to remove a chipped bone in his right elbow.

Lee was expected to be the national team’s closer. Throughout his career with the Bears, before he left for military service two years ago, he tallied a total of 68 saves. He completed his service toward the end of the regular season this year and rejoined the Bears just before the Korean Series. He tossed in five games before the championship series and captured one win and two holds.

Lee will be replaced by Sim Chang-min of the Samsung Lions. Sim spent this year as a full-time closer for the Lions, the first time he’s taken up the job. Tossing in 62 games, he recorded two wins, six losses, 25 saves and four holds with a 2.97 earned run average. 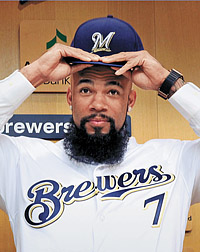 MILWAUKEE - Free agent Eric Thames agreed Tuesday to a $16 million, three-year contract with the Milwaukee Brewers, who cut first baseman Chris Carter after a 41-homer season that tied for the National League lead.

General manager David Stearns said Thames’ left-handed bat and versatility was a good fit in the lineup for the rebuilding club.

Thames spent two seasons in the major leagues, hitting. 250 with 21 homers with Toronto and Seattle in 2011-12. The Blue Jays drafted Thames in the seventh round of the 2008 amateur draft.

Thames could add a left-handed contact hitter to the middle of Milwaukee’s lineup, which is primarily right-handed. He was the MVP in Korea after becoming the first person in league history with 40 home runs and 40 stolen bases.

Carter, 29, agreed to a $2.5 million, one-year contract after he spent his three seasons with Houston and earned $500,000 in performance bonuses based on plate appearances.