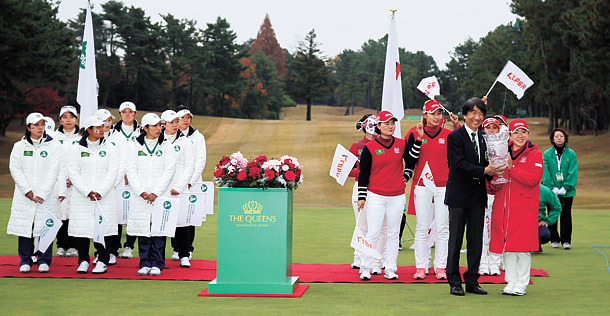 The KLPGA captain, Shin Ji-yai, right, smiles with her team at the Miyoshi Golf and Country Club in Nagoya, Japan, on Sunday. The KLPGA won the second edition of The Queens against the JLPGA Sunday. [KLPGA]

The Korean women’s golf team proved themselves to be a world-class group in Japan on Sunday.

The Queens, presented by Kowa, is an annual tournament, which began in 2015, between four of the world’s leading women’s golf tours - the Ladies European Tour, Australian Ladies Professional Golf, the JLPGA and the KLPGA.

This is the first time the Korean ladies won, after placing second behind the JLPGA in the Queens last year, where they earned 24 points in single-match play with eight wins and one loss.

But most players on the JLPGA team who competed on Sunday failed to outperform Korean ladies again after the Japan Tour this year - Korean golfer Lee Bo-mee topped the season’s LPGA money list, and Shin followed in second. Among the top 10 players on the money list this year, six are Korean players.

Ristuko Ryu, who was ranked third in this season’s LPGA money list, said before the event, “It’s right for Japanese players to outperform others at this event [held in Japan].”

Followed by Shin’s victory over Shiho Oyama during the first match, Kim Min-sun defeated Ai Suzuki 4 and 3 during the second match. Jang Su-yeon came from behind and defeated Ryu 1 up during the third match, while Kim Hae-rym won the fourth match against Megumi Shimokawa by 3 and 2.

Korean women golfers outperformed the JLPGA even after the winning team was confirmed. Ko Jin-young, selected the KLPGA MVP this year, Cho Jeong-min and Bae Seon-woo won the fifth to seventh matches.

The KLPGA team collected a total of 15 points in single-match play with seven wins and one draw on Sunday.