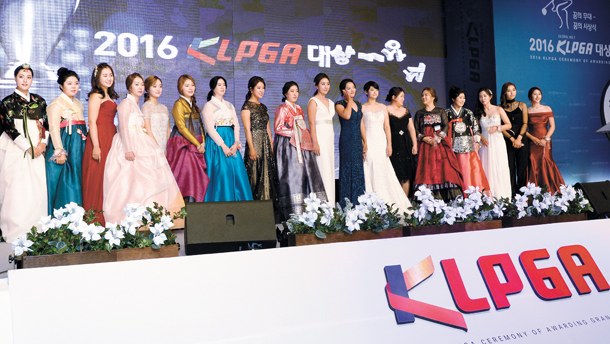 Female golf players in the KLPGA tour pose for a group photo on the award ceremony stage at Lotte World Hotel on Tuesday.

Ko Jin-young was selected as the KLPGA player of the year, while Park Sung-hyun, who will be joining the U.S.-based tour next year, was honored as the player with the most number of wins.

Chun In-gee, the U.S.-based tour rookie of the year and the winner of this year’s Evian Championship, received the special award designated for golfers playing overseas. Hong Jin-joo was the recipient of the special award given to those who play in the domestic tour. Lee Jeong-eun, who finished in the top 10 seven times this year, received the KLPGA Rookie of the Year award.