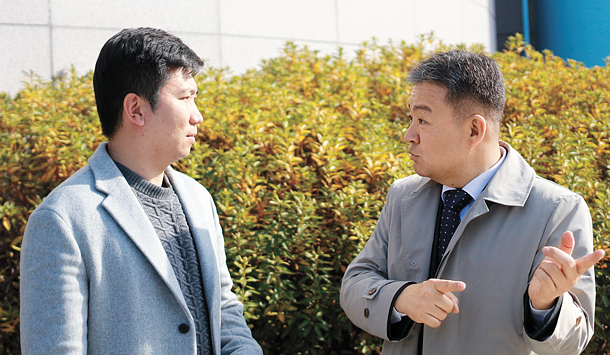 Park Sung-joon, a physical education professor at Kyonggi University, agreed as the two discussed the future of Korean sports with the JoongAng Ilbo.

At this year’s Rio Olympics, Korea finished eighth in overall medals, taking home 21 medals total. But a careful look at the results shows Korea underperformed in what many call fundamental sports events, such as track and field and swimming.

One of the obstacles to the development of professional sports is a failure to support athletes after they hit their peak, says Ryu.

Ryu, who was elected to the commission by ranking second out of 20,000 world athletes, said, “I feel like I’ve been given a lot of homework after meetings that lasted for two weeks.”

Although a successful athlete in Korea, Ryu said he “felt the need to work harder,” adding, “speaking English is not enough. You need to have knowledge that extends to various fields and an international mindset to understand what’s being discussed.”

Ryu studied sport management at Kyonggi University, but says he cannot emphasize enough the importance of a well-rounded education for professional athletes.

“Korean athletes largely limit their fields of study to sports,” he said. “In sharp contrast, foreign athletes choose their study from a wide range. A good example is Thomas Bach.”

Bach, an Olympic fencing champion and the president of the IOC, earned a doctorate in law from the University of Wurzburg.

“There are over 10,000 professional athletes nationwide who give up sports in the middle or retire,” said Park, who was a swimmer as a high school student. “Only 15 percent succeed in the second chapter of their lives. Even star athletes need to acquire knowledge and experiences in various fields to prepare for their future.”

Ryu said, “Korea National Training Center [in Seoul’s Nowon District] symbolizes the intensity of training for national athletes. But there are limited opportunities to interact with others from different backgrounds inside the center.”

The situation seems to be worse for non-professional sports, with the recent Choi-gate scandal imperiling the Park Geun-hye administration.