‘I’m accomplishing life’s long-term goals one by one.’

‘I’m accomplishing life’s long-term goals one by one.’ 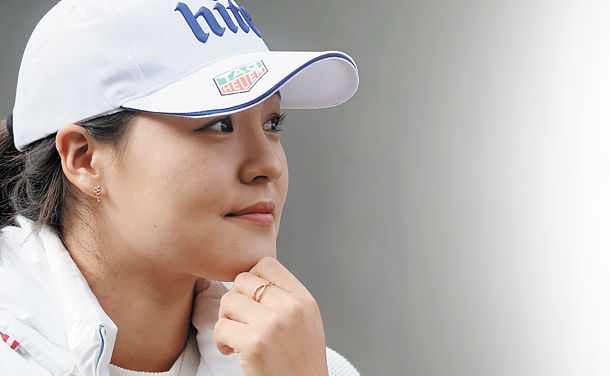 Chun In-gee, who won both the Rolex Rookie of the Year and the Vare Trophy in the LPGA tour this year. [KIM SANG-SEON]

When her shots are off or even when her putts skip over the hole, Chun In-gee never loses her smile.

The power of positive thinking has greatly helped the 22-year-old with her games, she said. Chun played a full season in the Ladies Professional Golfers’ Association (LPGA) Tour this year, and won both the Rolex Rookie of the Year and the Vare Trophy on the first go. The prodigy was also victorious in the Evian Championship with a record-breaking finish at 21 under.

Then came “Luggage-gate” at the Singapore Airport in March, when the young player injured her hip bone and her fifth and sixth vertebrae after being hit by a piece of luggage that was rolled down an escalator. The press went wild over the fact that the suitcase belonged to the father of Chun’s rival, Jang Ha-na. Although the two players came to a peaceful understanding, both were hurt, and tied for 13th place in the Rio Olympics.

But Chun saw light in the hardship, saying, “The incident hardened me. I learned a lot from the Olympics and that all lead to the victory in the Evian Championship.” The JoongAng Ilbo sat down with her in Seongnam, Gyeonggi, on Dec. 8, when the golfer had been enjoying a peaceful rest after returning from the United States to a golf academy run by Park Won, her coach and a JTBC commentator. The following is an edited excerpt.

Q. How have you been doing?

A. I’ve been busy with my final exams [at Korea University]. I signed up for seven lectures so that I could graduate this semester. I’ve decided to leave my clubs for five weeks until my back heals completely.

How was the last day of the LPGA Tour when you were up against Lydia Ko over the Vare Trophy?

We both started out bad, but then we told each other “let’s hit handsome birdies.” Then Lydia made three birdies in a row from the 10th hole to the 12th.

Didn’t that unsettle you?

Not at all. Lydia is such a nice person, sometimes I’m surprised how she takes care of all those people, and it’s just so pleasant to play with her. When a player pulls off an amazing shot, you can’t help but congratulate her.

But then you made three birdies in the last three holes, right?

The 18th hole had a strong back wind and the green was so hard. I trusted the club I chose and made a confident shot, and thankfully it landed close to the hole. I wished so badly it would go in. But instead of telling myself I had to get it in, I asked myself how I would get it in.

You recorded the lowest winning score in the Evian Championship, didn’t you?

I really like the venue for the Evian games. When I didn’t get through the qualification cut last year, I told myself that I would put everything I’ve got to win this year, and I did. The pressure I had in the last day made the 18th hole the longest I’ve ever seen.

You spoke to the press after the game in French, right?

I wanted to show my sincere gratitude to the French gallery. The pronunciation was so hard, and I had to murmur the words in French in between the games so that I could memorize the words, which actually helped me play.

What did you say?

Madames et messieurs, merci beaucoup [Ladies and gentlemen, thank you very much]. And then I forgot the rest and finished in English. I’m really shy off the golf course. (Laughs)

Did you have a hard time with your English in the United States?

Yes, and I even cried early on in the Tour, saying that English is so hard. I want to play comfortably in Korea or Japan. I missed so many people like my friends, teachers, parents and grandmother.

What did you do to alleviate your stress?

I can’t drink much. I like running instead. I was into building nano-blocks [mini Lego blocks], but using my body took away more stress.

If you had to choose, which would be your best shot?

The hole-in-one in the 2015 Doosan Match Play Championship. I propelled the ball high with the iron 8, it landed exactly where I wanted it to, and then it rolled down beautifully.

What would be the worst one?

If you mean by the worst a mistake or a failed shot, then I have none. One ball did land in the water in the 2014 KEB Hana Bank Championship. I thought, “How on earth could I have made such a shot?” Then I practiced the 100-meter range really hard, and thanks to all the training, I was able to land all my balls on the green without mistake. The failed shot brought about a better outcome, so it’s not a failure.

[Remembering a book by the footballer Lee Young-pyo, “Success is not success and failure is not failure,” the reporter made a joke about how the young player seemed like a senior adult who has seen all the ups and downs of life.] I feel like I’m talking to a senior adult.

How did “luggage-gate” turn out?

Ah (long sigh). I feel so much tougher inside. I know that now, I can get myself up on my feet after anything, and that there are so many people around me who try so hard to guide me in the right direction.

You’ve earned over two billion won ($1.71 million) in prize money this year. Does it feel good to earn so much?

Yes (laughs). I feel happy every time I see that the money I’ve earned has been used in the right places. I don’t talk about it much, but I donate a lot. I visit where I would like to make the donations and make the final decisions whether or not to go ahead.

Do you have any thoughts on marrying?

I used to want to get married while I was in my 20s. My two best friends, Seo Hee-kyung [former professional golfer] and [Park] In-bee [professional golfer], seem so happy. But then a couple of months back, I started to think that it might be better to marry after 30, when I’ve played enough golf and enjoyed all the things while I’m young.

It might be hard to motivate yourself since you’ve already achieved so much.

No. I told you after winning the Evian Championship that “the flower of my life hasn’t bloomed yet.” I’m accomplishing life’s long-term goals one by one. I’d like you to watch and see what kind of a golfer and person I grow into.

Could you give a tip to all the weekend golfers out there?

Do not lose your rhythm. Greed gets you nowhere. If you aim for two shots on par-5 and don’t make it, that’s where the trouble begins.