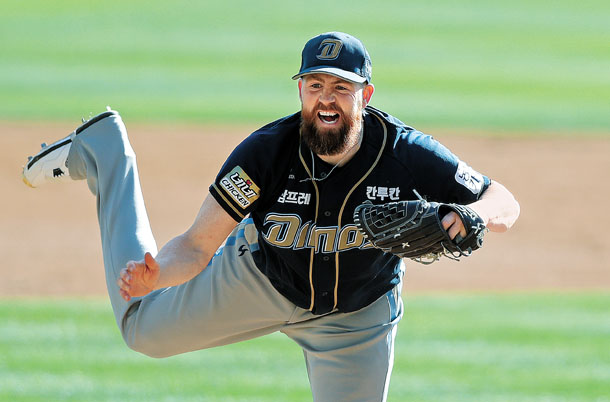 Hacker, 33, went 13-3 with a 3.45 ERA in 23 games in the regular season and helped the Dinos reach the championship series for the first time in club history. The Dinos, however, were swept by the Doosan Bears in the Korean Series.

“Hacker had a stable performance for the last four years and became the ace of this team,” the Dinos said in a release. “We acknowledge that he was pivotal for us to reach the Korean Series for the first time.”

The American right-hander made 111 KBO appearances from 2013, with a record of 44-27 and a 3.54 ERA. In the best-of-five second round playoff series against the LG Twins this year, Hacker started two games and allowed only three runs in 14 innings.

“The last four years with the Dinos have been really an important experience in my baseball career,” Hacker said through the club. “I’m happy that I can extend this experience with my good teammates.”

The KBO teams are each allowed three foreign players, one of whom must be a position player. The Dinos said that Hacker will join their spring training camp in Arizona in February.