Pirates’ Kang may be cut from team

Pirates’ Kang may be cut from team 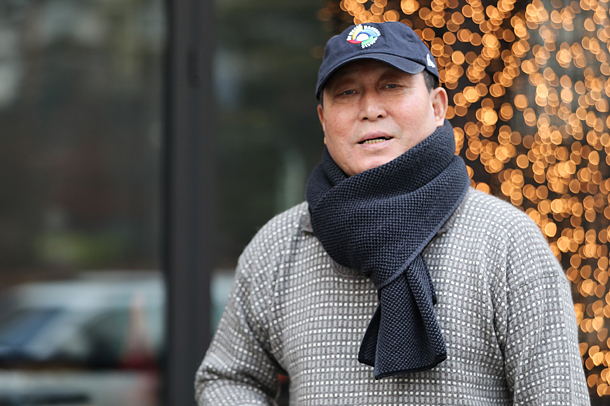 Kim In-sik, manager of the South Korean national baseball team, speaks in an interview in Seoul on Monday. [YONHAP]

Given his recent off-field trouble, Pittsburgh Pirates third baseman Kang Jung-ho will likely be cut from the South Korean national team ahead of an international tournament this spring, its manager has said.

Kim In-sik, who will manage the country at the World Baseball Classic (WBC), told Yonhap News Agency on Monday that he was aware of “the worsening public opinion” of Kang. The former Korea Baseball Organization (KBO) star was arrested in early December for fleeing the scene after causing an accident while driving under the influence (DUI) in Seoul. Police said Kang had also faced DUI charges on two earlier occasions in Korea.

Kang, who has hit 36 home runs in his first two big league seasons, was named to South Korea’s 28-man roster announced in November. The team may make changes until February, with the WBC scheduled for an early March start.

“Kang Jung-ho is a great player, but I’ve started to wonder if it’s worth the trouble taking him to the WBC (amid falling public opinion),” Kim said. “Personally, I am leaning toward taking Kang off the roster.”

On the other hand, Kim said he may ultimately name a player who was initially left off, owing to his own off-field issue.

Oh Seung-hwan, closer for the St. Louis Cardinals, wasn’t on the 28-man squad despite his strong credentials. The right-hander was fined by a South Korean court in January 2016 on illegal overseas gambling charges, and the KBO slapped him with a 72-game suspension, which will take effect if Oh returns to the league.’

Kim at first indicated he was willing to look past Oh’s gambling history but backed off when faced with huge backlash from the public.

In recent weeks, though, elder statesmen in baseball opined that Oh should be on the national team because he has already been punished for his wrongdoing. Kim himself said in December that Oh’s absence hurt him the most because injuries have decimated the already thin South Korean pitching staff.

And since South Korea will host the first round games at Gocheok Sky Dome in Seoul, Kim said he wants to showcase his major league closer before home fans.

“I think the public opinion on Oh Seung-hwan is turning more positive,” the manager said. “I know some fans may be upset with Oh’s inclusion, but I am sure there are others who would like to see him pitch at home.”

Kim has scheduled a meeting with his coaches for Wednesday to discuss these roster decisions and other national team issues. The manager said he doesn’t expect to finalize the roster right after the meeting.

“It’s never easy to put together a national team,” said Kim, who has lost a slew of players to off-season surgeries. “I was surprised with these injuries and incidents.”

A pair of other major league players - Choo Shin-soo of the Texas Rangers and Kim Hyun-soo of the Baltimore Orioles - are also question marks because of their teams’ reluctance to let them play.

The three previous WBC tournaments all opened in early March, at a time when major league clubs are in spring training ahead of new seasons. Though Major League Baseball (MLB) organizes the event, MLB clubs haven’t exactly been enthusiastic about releasing their players because of injury concerns.

Kim, the manager, said the clubs may have their say in the end, and added, “We have to brace ourselves for the worst case scenario.”

If these big leaguers aren’t available, South Korea may just field its worst team on paper in recent memory. But Kim bristled at the notion that the team should just give up on this year’s WBC and select young prospects to test their skills before the 2020 Tokyo Olympics.

“The WBC isn’t a place to get ready for the Olympics, and no fans want to see the team lose,” Kim said. “We have to assemble the best team possible under the circumstances and win as much as we can at the WBC.”

The national team will open its training camp in Okinawa, Japan, on Feb. 12. The first game will be against Israel on March 6, followed by the Netherlands on March 7 and Chinese Taipei on March 9. All Korean games will start at 7 p.m.

South Korea made it to the semifinals at the inaugural WBC in 2006 and finished runner-up to Japan in 2009, with Kim at the helm for both teams. The country, however, failed to make it out of the preliminary round in 2013.