‘The Fox of the Court’ is ready to win

‘The Fox of the Court’ is ready to win 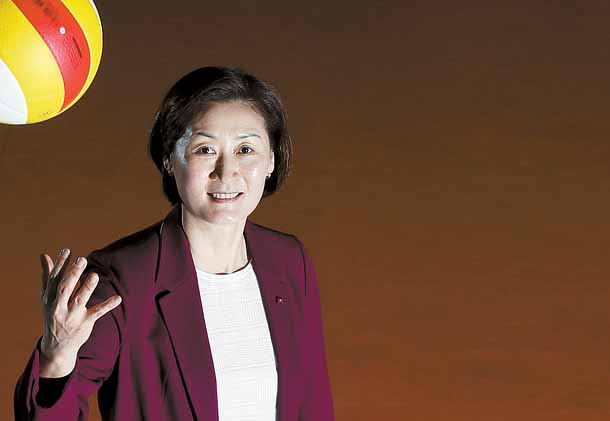 Park Mi-hee, coaching the Incheon Heungkuk Life Pink Spiders volleyball team, leads her team with gentle leadership. “You must look at the leader equally, regardless of the gender,” said Park. [JANG JIN-YOUNG]

The world of professional sports can be tough for women, especially the coaches. Nonetheless, Park Mi-hee, coaching the Incheon Heungkuk Life Pink Spiders volleyball team, is currently the only female coach in Korean professional sports. Park also holds the record as the female coach with the longest career: two years and eight months.

“Most of my senior female coaches quit before their two years, and the pressure is quite big,” said Park in an interview with the JoongAng Ilbo on Dec. 28 at the Heungkuk Life academy in Yongin, Gyeonggi. “I told myself that I shouldn’t be weak because of the pressure, but just focus on the things I can do. I kept to that, and the time just flew by.” Volleyball coach Cho Hye-jung, the first female head coach in pro sports, and female basketball coach Lee Ok-ja, both retired within a year.

A few years ago, Park was a volleyball star herself, dominating her generation. Older fans still remember the agile young Park swiftly passing balls in her Midopa [currently acquired by Lotte] uniform in the 1980s. She was called “The Fox of the Court” because of her versatility not only in her main position as center, but also as a setter.

When Park came back to the sport, first as a commentator and then as a coach, she wasn’t exactly welcome. Outsiders had been doubtful as to whether someone who had been off the court so long had what it takes to guide a team. “People were very hostile at first, saying things like, ‘Can a female coach make it?,’” recalled Park. “And when my team won, I even heard the [other team coach] say ‘It feels bad to lose to a female coach.’”

But the 54 year-old coach held on, and the buds of her effort started to bloom in the 2014-15 season. Heungkuk Life ranked fourth in the tournament in 2014 and third in 2015. The team is currently taking the lead in the fourth round of the V-League for the 2016-17 season with 11 victories and four defeats, 32 points in total.

The average age of the 18 players on the team is 24 as of 2017. In 2014, when Park first started out as a rookie coach along with the young and eager athletes, the all-female team had to persevere through tough training to succeed. But they have turned into a team with a perfect balance between defense and offense in just three seasons.

The strong duo of Tabi Love and Lee Jae-yeong help keep the scores high. Love, a Canadian player, has made the fourth highest number of scores in the league, 375, while Lee is seventh with 249. Lee has also made the most number of receives, 4.02 per set. Cho Song-hwa is Korea’s best setter, with an average of 12.82 per set.

The key to Park’s leadership is warm friendliness. Rather than pushing the players with authority, Park listens to her players and gently guides them.

“Female players are more sensitive than their male counterparts,” said the coach. “So it’s more important to understand them than just give them practice routines. I try to observe each and every player carefully and form a common ground. If someone is not eating well, I ask whether something is up, or whether she had a fight with her boyfriend. To a player having problems with her skin, I ask her whether she wants me to take her to a dermatologist.”

“I’ve been in a lot of overseas leagues,” said Love, “but this is my first time with a female coach. I settled down quickly because she hugged me and treated me kindly.”

To help foster camaraderie, the team often goes out to movies together or shares a meal of fried chicken and beer. The players recently posted online a picture of themselves at a bowling alley. “It’s good that I’m a woman because I can bond with them in a friendlier way,” said Park. “When they’ve done well, I pat them on the hips, and when we’re happy, we gather for a group hug.”

Members of the Heungkuk Life volleyball team call their coach a princess because of her unshakable poise. “I usually don’t get angry,”

Park said. “I got angry at my children when I really needed to, because then they realized, ‘our mom could be scary, as well.’ It’s the same with players. When I get furious once in a while, they get nervous.”

She added, “My shoulders are heavy as a female leader,” citing the way Korean society has turned hostile toward its female president, Park Geun-hye, over her power-meddling scandal. “I regret the current situation, but it’s a jump in logic to oppose female leaders altogether,” said Park. “You must look at the leader, regardless of gender. For my part, I will focus on bringing out the best of all my players.”