Song talks about his past and road ahead

Song talks about his past and road ahead 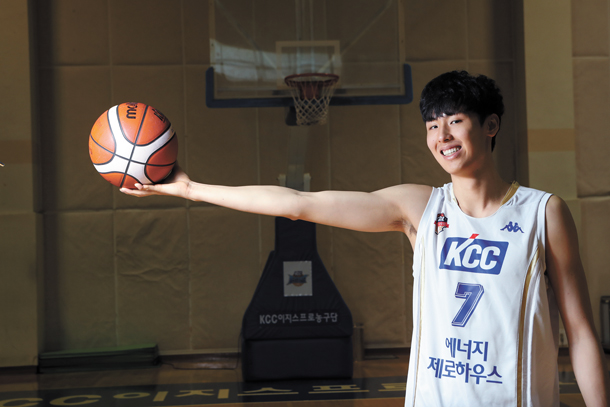 In the coming days, when someone thinks about Jeonju KCC Egis of the Korean Basketball League (KBL), the name of Song Kyo-chang may pop out immediately as the star of the franchise - at least that’s what the 21-year-old forward is aiming for.

So far this season, Song has played in 31 games while averaging 12.03 points per game. He also has 5.9 rebounds, 1.5 assists and 1.1 steals per game under his belt this season.

The JoongAng Ilbo sat down with the Egis’ rising star to discuss his basketball career and his objectives for the future.

Q. You have improved a lot over the past two years since you’ve turned professional. What is the difference from last year?

A. I get to play more. Last year when I went in to play, due to nervousness, my views were very limited and I tended to rush myself. I felt like I had to prove myself to others. However, I am more relaxed, and before I go in to play, I think about what I can do and what I should do. I learned how valuable it is to play while I was benched last year. Every single game is just as important as the championship game.

You are the youngest player to play in this year’s all-star games at the age of 20. How do you feel about that?

It’s definitely good to get some attention, but I don’t have much thought on being the youngest player to play in the all-star games. I just want to have fun.

You are competing in the dunk contest during this year’s all-star games, just as you did last year. How do you feel about that?

I wasn’t really interested in the dunk contest because unlike other players, I can’t do any fancy dunk. I would have to get advice from my teammates.

Since you’ve debuted as a professional at an early age, many talked about breaking Joo Hee-jung’s 1,000-game record. Is that something you’d like to do?

I’ve heard about that record. It’ll be great if I can break the record, but it won’t be easy. It’ll only be possible if I play as a professional until I’m 40 years old without any injuries.

You used to play baseball. What made you want to switch to basketball?

Since I was little, I loved playing sports, but I hated studying. For this reason, I joined the baseball team, but they forced me to shave my head. I also got beat up a lot so I eventually quit. But still, studying made me go crazy so I started playing basketball. Basketball seemed fun when I watched my brother play with his friends in the street and I loved watching “Slam Dunk” (a Japanese cartoon about a basketball team).

What was your parent’s reaction when you told them you wanted to play baseball and basketball?

My father likes sports, but my mother doesn’t. When I played basketball, my father took me around. My mother told me to give up when I said basketball was hard.

Now that I’m on television often playing as a professional, I think my mother likes it. When I have games in Seoul, they come to the stadium to watch me play. Since I do not live with them, they welcome me whenever I go home. Of all, my dog welcomes me the most.

What do you do during your off days?

I usually watch movies or play games on my cellphone, but I sleep a lot. When I don’t get enough sleep, I can’t relieve my stress. One time, I went to bed at midnight and woke up at 2 p.m. the next day. When we’re on the road for away games, I sleep in the car. Recently, I watched a movie called “Master.” I enjoy watching action movies and comedies.

What do you think about your head coach, Choo Seung-kyun?

He is very charismatic and quiet, but when he starts coaching, he is very passionate, which impressed me. He gives good advice. At times, I get physically worn out since I am not used to playing such a long season. But when the coach sees me struggling on the court, he disciplines me and keeps me focused.

What does the Egis mean to you?

The Egis is like a family to me. When I decided to turn professional right after graduating high school, many thought it was a reckless challenge. I was expecting to be the fifth or sixth pick, maybe even as eighth during the rookie draft. When the Egis called my name third in the draft, I was very surprised. The Egis trusted me and helped me improve.

When I first joined the team, I was out of it. My only goal was to play in games and to adjust to the team. Now that I have more playing time, I have a goal. I want to break Choo Seung-kyun’s scoring record (10,019 points, 2nd in the league). Also, I want to play for the Egis until I retire.