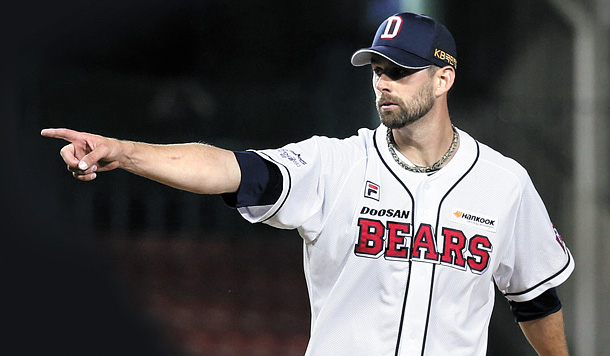 The 35-year-old starting pitcher for the Doosan Bears, renewed his contract with Doosan for $2.1 million. With the renewal, Nippert surpassed Esmil Rogers’ of the Hanwha Eagles $1.9 million.

“Looking at Nippert’s performance over the past six years at the Doosan Bears, I had no doubt about renewing his contract,” Kim Tae-hyeong, manager of the Bears, said.

During Nippert’s 2015 season, he failed to live up to the $1.5 million paycheck, playing in a meager 20 games while winning six and losing five. His salary plummeted to $1.2 million in 2015.

After the disappointing 2015 season, he showed the dominant form on the mound as he entered his sixth season with the Doosan Bears. The stats speak for themselves. Throughout the 2016 season, pitching in 167 and 2/3 innings, the American pitcher captured 22 wins, more than any other pitcher in the league, while losing only three games.

This is the most wins he has earned since he joined the league in 2011. His winning percentage (WPCT) stood at an astonishing .880, the top of the league, and his earned run average was the lowest of all KBO pitchers at 2.95.

During Game 1 of the championship Korean Series, he threw eight shutout innings to help the Bears defeat the NC Dinos. As he played an essential part of the Bears’ championship-winning team, with his outstanding 2016 season, he won the MVP award.

The Doosan Bears were both the pennant winter and Korean Series champion in 2016.

Nippert will be entering his seventh KBO season, making him the longest-playing foreign to play in the Bears’ history.

Doosan Bears renewed their contract with two other foreign players. Michael Bowden, a pitcher, signed his renewal for $1.1 million and outfielder Nick Evans was brought back for $680,000.