Kim isn’t satisfied being the best

Kim isn’t satisfied being the best 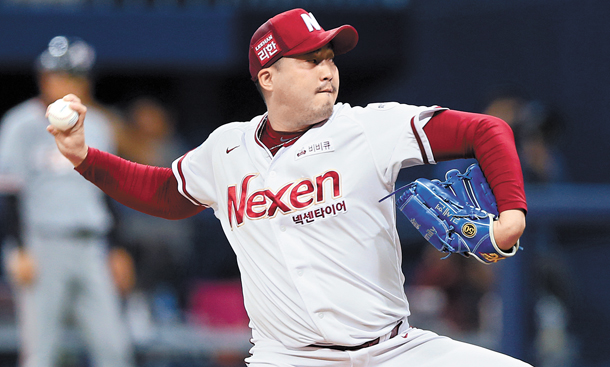 Despite leading Korean baseball in saves in 2016, Nexen Heroes’ closer, Kim Se-hyun, thinks he has room for improvement.

To be even better in the 2017 Korea Baseball Organization (KBO) season, Kim said he wants to add a new pitch to his arsenal.

“I want to develop a pitch that I can count on in key situations,” Kim said Tuesday, before the Heroes departed for Arizona, the site of their spring training. “Instead of a breaking pitch, I want to be able to throw a variation of the fastball.”

The right-hander led the KBO with 36 saves in 62 appearances last season, while posting a 2.60 ERA. He allowed just two home runs in 62 1/3 innings in his first season as the full-time closer.

Those strong numbers aside, Kim said he was most disappointed with allowing inherited runners to score.

Last season, 16 of 31 base runners who had been on when Kim took the mound came around to score, the highest ratio among all KBO closers.

“That was problematic last year,” Kim said. “During spring training, I’ll ask coaches to make me pitch with men on base.”

“I am even more excited about this year than the last,” Kim said. “I think this will be the season when I take the next step. I’ll try to lead by example.”

Before racking up saves for the Heroes, Kim was best known for overcoming leukemia to make it back to the mound. Kim was diagnosed with chronic myelogenous leukemia in September 2015 but got himself ready for 2016 after a few months on medication. Kim said the disease may just have been a blessing in disguise.

“Because of that, I started taking better care of my body,” he said. “I am still on medication, but it doesn’t affect my baseball career.”

Though he’s had his taste of success as the closer, Kim said he isn’t too crazy about personal stats.

“A lot of things have to go right to pick up saves, and it’s not something you can have just because you want to,” he said. “This year, my goal is to try to help the team win.”