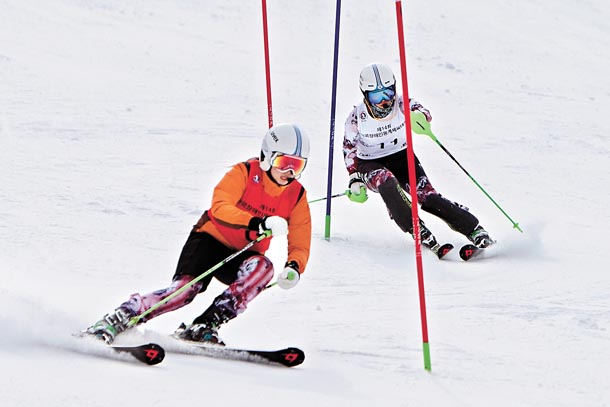 “Down! Turn! Up!” yells the 22-year-old Ko Un-sori, a ski guide for the blind, at Yang Jae-rim, 28, a member of the Korean national team for the blind.

Born a premature baby weighing 1.3 kilograms (2.8 pounds) due to hyperoxia, Yang lost her sense of sight. Through 10 surgeries, she can see to some degree with her right eye, but whereas normal vision affords visibility for up to 60 meters (66 yards), Yang strains to see beyond 2 meters. Skiing at 60 kilometers per hour is possible only with the help of her guide, Ko.

Yang was introduced to skiing at the age of five to help develop her sense of balance. After entering Ewha Womans University for painting, she left her ski poles in the closet to gather dust. But after the Korean Association of Persons with Physical Disabilities asked her to try out for the Paralympics, she became an athlete.

Her parents worried that the ultraviolet rays reflected off the white snow would make her remaining eyesight worse, but they couldn’t prevent her from competing. 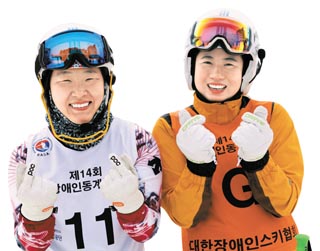 Member of the Korean national team, Yang Jae-rim, in white, and guide Ko Un-sori, in orange, ski down the slope at the 14th National Winter Para Games held on Wednesday. [KOREAN ASSOCIATION OF PERSONS WITH PHYSICAL DISABILITIES]

Eventually competing in the 2014 Winter Paralympics at Sochi, she had to swallow some tears when she fell on a turn and placed fourth. Her disappointment was palpable. Injuring herself while training for the Paralympics, she had to rest for three months, restarting her training a week before the event.

“It was so unfortunate,” she said, “I had to set my sights on a medal at PyeongChang.”

The association found a guide for her in June 2015. Yang found Ko, who had competed as a representative for the Universiade and as a reserve member of the Korean national team. “The first time I met her, she seemed quiet and delicate,” said Yang. “The second time I met her, she said ‘It’s going to be difficult,’ but I felt her concern. Sori [her nickname for Ko] is bubbly and positive. She’s full of energy and she’s even danced before a race. I like that she’s the total opposite of me.”

Competing together for the first time at a southern hemisphere competition in New Zealand at August 2015, they were co-champions. Following, they snatched two silver medals in the Canada World Cup in December the same year, but it wasn’t always smooth sailing. Yang injured her right arm a month later at the Italy World Cup in January 2016. Ko said, “I had my mind on crossing the finish line and didn’t see [Yang] was injured. I felt sorry seeing her cry from her injury.”

Ko visited Yang often at the hospital, shared her thoughts and was a shoulder to cry on. At Ko’s encouragement, Yang went through physical rehabilitation. “I thought I may not have been able to ski again,” she said, “but because of Ko, I’ve conquered my injury.” Leaving the 2015-16 season with an injury, the pair returned for the 2016-17 season and in the Slovenia World Cup, they were able to get a silver and bronze medal. Recently, the two have appeared on commercials for cellphone carriers.

Next month, at the Jeongseong Alpine Ski Centre, the World Cup finals will open. The finals will act as a test event for the upcoming PyeongChang Winter Olympics in 2018. It is an important trial-run for the two, intending on having nothing less than a stellar run for the 2018 Paralympics. “As the competition approaches, my heart is fluttering with anticipation and I’m getting nervous,” said Yang, while Ko said, “It’s fun to watch you improve as time passes.”

In order to prepare for the Paralympics, Yang delayed her plans for graduate school.

“After getting a medal,” she said, “the idea is to continue bookwork.” Ko is also on academic leave. She is in the same school as Yang, majoring in sports science. They always look for the best places to eat together. Since they both love traveling, when this season ends, they plan to bike around Jeju Island.

“We’re in the same school, and when the Paralympics ends,” Ko said, “we plan to live together.”