Jang opens her season with win in Australia

Jang opens her season with win in Australia 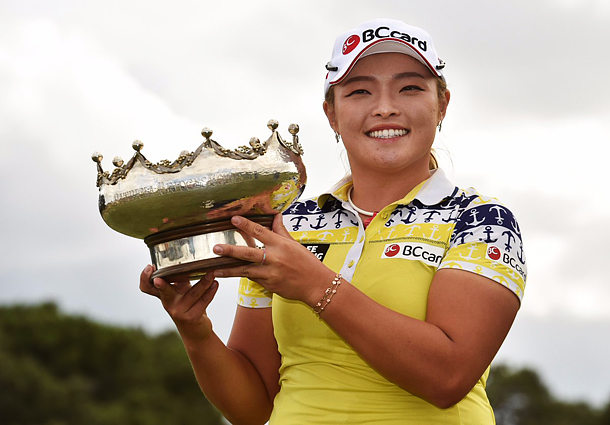 Jang Ha-na holds up her trophy after winning the 2017 ISPS Handa Australian Open at the Royal Adelaide Golf Club on Sunday. Jang stormed to a three-shot victory with a blistering eagle-birdie finish. [LPGA]

Jang started her final round four shots behind the leader, Lizette Salas of the United States, at seven under par.

Despite Jang’s slow start with a bogey on the first hole, she kept herself steady as she continued to make par until the 12th hole.

“The second shot [on the first hole] was a really big miss,” Jang said during an interview with the LPGA after the game, saying she was nervous on the tee because she wanted to make a birdie at every hole. When Jang kept making pars, she told her caddie that she would “just be patient [with] every hole,” she said.

Once Jang got to the back nine, she climbed up the leaderboard, making three birdies as well as an eagle on the 17th hole to conclude her round with a score of 69, four under par. Jang’s score of 69 matches the lowest score of the day as the course was in tough condition.

She finished the tournament with a total score of 10 under par, 282, three shots ahead of runner-up Nanna Madsen of Denmark.

After her even-par round on the second day, Jang’s position dropped to tied for 31st, but she managed to move her way up on the third day, shooting three under par to tie for seventh.

Lizette Salas, the leader after the third round, struggled to maintain her lead as she shot five over par, 78, in the final round to finish tied for seventh at five under par, 287.

Jang’s first win of the season follows a rough 2016. Although Jang captured three titles on the LPGA Tour last season, she took more than a month off after an odd incident in March involving her father, Jang Chang-ho, and fellow golfer Chun In-gee.

During the week of the HSBC Women’s Champions event, Chun was hit on her lower back after Jang’s father lost his grip on a 15-pound travel bag while riding an escalator at Singapore’s Changi Airport as they were on their way to the tournament.

Following her victory, Jang did a little Beyonce-inspired number on the green that drew flak from fans upset that she showed little sign of remorse toward Chun.

As a result of the backlash, Jang took more than a month off from playing in the LPGA circuit.

She eventually came back but didn’t nab her first win until October 2016 at the Fubon LPGA Taiwan Championship in Taipei.

Sunday’s win marks Jang’s fourth on the LPGA tour and the 12th in her career, including her eight KLPGA tour victories.

Jang will next compete at the Honda LPGA Thailand in Chonburi from Thursday to Sunday.