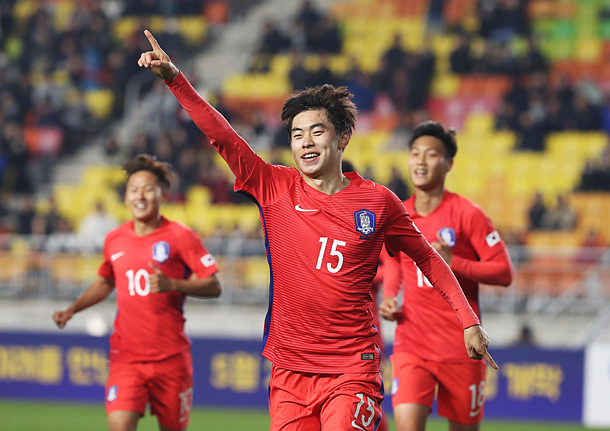 Kim Seung-woo, Korean U-20 football team midfielder, celebrates after scoring a goal against Honduras at a U-20 World Cup test event in Suwon, Gyeonggi, on Saturday. [YONHAP]

Korea beat Honduras 3-2 in their opening match at a FIFA U-20 World Cup test event at Suwon World Cup Stadium in Gyeonggi on Saturday.

Korea scored three goals from set pieces and edged out the South American side at the four-nation tournament that also features Zambia and Ecuador.

Gearing up for the U-20 World Cup as the host, Korea invited Honduras, Zambia and Ecuador for the current tournament as a warm-up for players under 20. Those three teams are also participants of the U-20 World Cup, which will be staged in six Korean cities from May 20 to June 11.

Korea first got on the board in the 15th minute when center back Jeong Tae-wook headed down a Lee Seung-woo cross. Honduras, however, leveled the score 10 minutes later after Darixon Vuelto’s left-footed strike beat Korean goalkeeper Song Bum-keun.

Kim Seung-woo earned a corner after his middle-range effort was parried by Javier Delgado in the 43rd. The defensive midfielder then gave the lead back to the hosts a minute later as he met Lee Jin-hyun’s corner.

Four minutes into the second half, Paik Seung-ho gave Korea a two-goal cushion with a header off Lee Jin-hyun’s free kick.

Korea, however, couldn’t enjoy their two-goal lead very long, as Honduras cut the deficit to 3-2 with a penalty in the 60th. Vuelto was brought down by Jeong in the box and Jorge Alvarez converted the spot kick.

Korea’s Lee Seung-woo, who plays with FC Barcelona Juvenil A, tried to get on the score sheet later in the match. He fired a right-footed strike from outside the box in the 62nd, but it rang off the post. In the 69th, Lee controlled the ball that was tipped away by Delgado and found the net with his right foot, but his effort was ruled offside.

Korea will next play Zambia in Cheonan, South Chungcheong, on Monday before wrapping up the tournament against Ecuador in Seogwipo on Jeju Island on Thursday. Earlier Saturday, Zambia blanked Ecuador 2-0 in their opener.

“Our players had a good desire to win, and they executed tactics very well,” Korea’s head coach, Shin Tae-yong, said after the match.

Shin, who took over the team last November, said his side was “lucky” to score three goals from set pieces.

“I told our players not to show too much about our set pieces and just display three patterns,” he said. “But all three led to goals, so I’m happy.”

Shin, however, said the young Taeguk Warriors still need to improve their defense.

“One mistake from defense can lead to a goal in international tournaments,” he said. “If we keep playing matches, I believe our defensive cohesion will be better.”