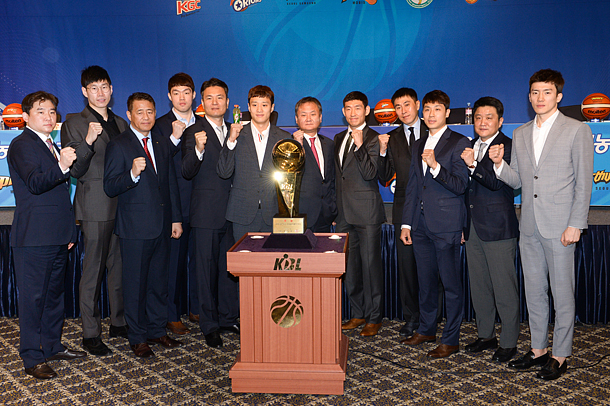 The managers and representative players from each team pose for a picture with the championship game trophy during the media day at the K-Hotel Seoul on Tuesday. [KBL]

Throughout the event, managers and players asked and answered each others’ questions, which were nothing like those on the previous day. Park Chan-hee of the Elephants was the first target, as he was given lists of questions regarding his regular season record.

In the 2016-17 season, he was ranked first in the KBL in assists but recorded 17.7 percent in three point shots. Huh Woong, a guard for Promy, as well as Oh Se-keun, a center for Anyang KGC, were asked to explain Park’s low three points shot percentage.

“I have other responsibilities on the court,” Park said. “Basketball is not math. My overall shot percentage is more important than three-point shot percentage.”

Choo Il-seoung, a manager for Orions, caught attention by giving short answers. When asked about O’Darien Bassett’s poor performance towards the end of the regular season, for example, Choo responded by saying, “If I knew the answer to that, we would have won the regular season.”

But Choo tried to avoid answering a question regarding the poor performance of Aaron Haynes. Also, when Yoo Do-hoon, the manager for the Elephants, asked for a strategy to win against Thunders for its upcoming championship match, Choo told Yoo Do-hoon to just pray.

The mood became tense at one point when questions about Keifer Sykes were brought up to Kim Seung-gi, manager of Anyang KGC.

But Yoo Jae-hak then asked, “If you were going to wait for Sykes anyway, why did you ruin our team by trying to recruit Marcus Blakely?”

In January, Choo tried to kick Sykes off the team and bring on Blakely right when his temporary contract with Phoebus ended. But at the same time, Phoebus was trying to extend Blakely’s contract to fulfill Nate Miller’s absence from injury.

When Blakely’s contract ended, Anyang KGC requested temporary consent to bring him on, but he refused the offer and ended up leaving the KBL.

“It was only my first year as manager,” Kim said. “I was going to wait but I started to rush my decision. If I had more experience as a manger like Yoo Jae-hak, I would have waited.”

After, Kim apologized to Yoo Jae-hak. The two managers were able to resolve their misunderstanding for the first time in three months.

The championship game will resume today with the match between Phoebus, the fourth ranked team, and Promy, ranked fifth. Following that, the Thunders, ranked third, and the Elephants, ranked sixth, will play their first match on Friday. The opponents for the top two teams, Anyang KGC and Orions, which automatically advanced to the semi-final, will be determined based on the result from the four teams starting its match today.