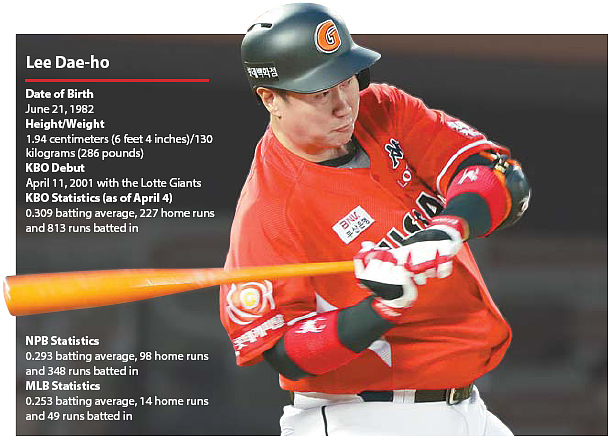 Lee Dae-ho hits a home run in his first at bat against the Nexen Heroes on Tuesday. [YANG GWANG-SAM]

Once Lee Dae-ho of the Lotte Giants swung a bat, the sound resonated through the stadium and the baseball went over the fence. After, Lee lifted both his arms and the fans cheered. After six years without a home run here, it was a stellar return to the Busan Sajik Baseball Stadium with his first at bat on Tuesday.

In January, the Giants signed a 15 billion won ($13.4 million) four-year contract with Lee, making him the most expensive free agent in KBO history. Lee, who was born and raised in Busan, graduated from Kyungnam high school in 2001 and made his KBO debut with the Giants, playing for 11 seasons.

In 2012, Lee played in the Nippon Professional Baseball league for four years and in the Major League with the Seattle Mariners for a year.

The Giants won the game 5-2 with Lee’s two-run homer and Choi Joon-suk’s solo home run. Lee maintained his 0.500 batting average by leading the team with two hits in four at bats, including a home run and two runs.

With a win, the Giants are now in a three-game winning streak, whereas the Heores are in a four-game losing streak since the KBO season began last week.

“I would have felt horrible if I didn’t hit a home run from the fans’ cheer,” Lee said.

To watch Lee play for the Giants in six years, 24,953 fans visited the Busan Sajik Baseball Stadium on Tuesday. Also, fans made a long line at the Giants’ store to buy Lee’s uniform.

“I wore Lee’s uniform for the first time in five years and it’s been three years since the last time I visited the Sajik Stadium,” said Yoo Byung-min, a Giants’ fan who came from Seoul to watch the game.

Since 2013, the Giants have failed to advance to the postseason for four straight years. With the Giants’ poor performance, there had been a large number of empty seats at Sajik Stadium. In Lee’s prime, from 2009 through 2013, the Giants recorded over 100,000 fans at the stadium.

Using Lee’s return as a marketing strategy, the Giants set an attendance goal of 100,000 fans this season, 20 percent higher than last year. Also, the Giants’ made a designated cheering zone for Lee by first base. The exclusive 99 seats went for 40,000 won, and sold out in two hours.