From ivories to hockey sticks

From ivories to hockey sticks 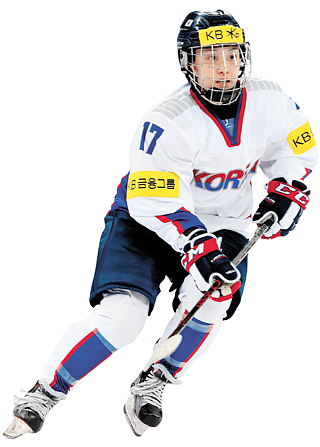 Until a few years ago, Han Soo-jin, center for the Korean women’s national ice hockey team, always had her hands on the ivory keys. But now, her hands are covered in sweat underneath her heavy hockey gloves.

Since she was little, Han was on course to be a pianist. Receiving her arts education through Yewon School, Seoul Arts High School and Yonsei University, she didn’t have time to think about ice hockey.

“I played ice hockey for a year in elementary school as a hobby,” Han said. “My mom wanted me to become a pianist.”

In 2006, when she was on her way to a piano lesson, she stopped by at the Mokdong Ice Rink to watch a hockey game. That’s when her passion for ice hockey came back to her. When she first told her mother about changing her career to become a hockey player, her mother strongly objected. 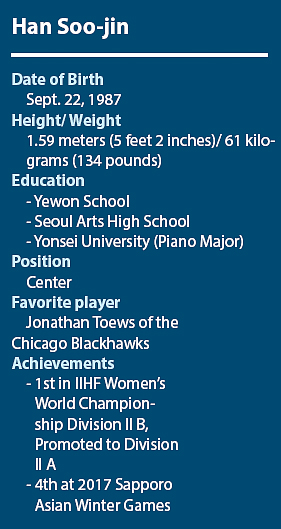 Han secretly bought hockey equipment and threw out the receipts. Seeing her determination to play hockey, Han’s mother approved under one condition, “If you study piano in college.”

That year, just as her mom asked, Han got accepted to Yonsei University and as soon as she started college, she joined the ice hockey club, created only with men. In 2007, she earned a spot on the Korean women’s national ice hockey team.

“When I played at piano concerts, I had to go up to a stage alone and it was a battle against myself,” Han said. “There were times when I forgot my score. But in ice hockey, I’m always playing with my teammates. I really like the idea in ice hockey of a team being one body.”

For this reason, Han chose the ice rink over piano. To be a better ice hockey player, Han left to Japan in 2011, the year of the Fukushima nuclear disaster.

“I left to Japan with only two million won [$1,770] in my hand,” Han said. “I worked at a restaurant, washing dishes and making dumplings.”

Han also had 15 million won worth of rent loans, which took her three years to pay off. Once she came back to Korea, Han continued her education by going to school in the morning and training at the Korea National Training Center at night. Having to manage both, it took Han seven years to graduate college. 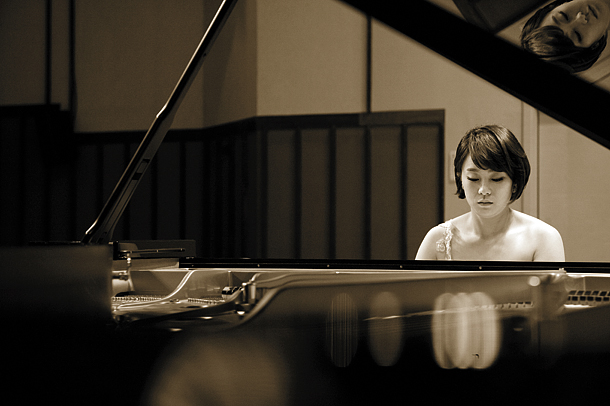 Rather than being a pianist, Han Soo-jin decided to play ice hockey because she was the happiest when she was skating on the ice with a hockey stick. [HAN SOO-JIN]

The Korean women’s national ice hockey team has been a joke to other countries, losing to Japan 29-0 in 2007. And many showed a cold attitude towards Han playing ice hockey.

“My friends asked me why I played ice hockey if there was no vision to it and if I could survive earning 1.2 million won a month,” Han said.

Han, who stands at 1.59 meters, is considered short as an ice hockey player, but is faster than others. Just like her favorite National Hockey League player, Jonathan Toews of the Chicago Blackhawks, Han does all the hard work for the team.

In 2013, she helped the team get promoted to the International Ice Hockey Federation (IIHF) Women’s World Championship Division II A by winning the Division II B. Also, at the Sapporo Asian Winter Games, Han played for the team when they won against China for the first time in history and finished fourth.

Han’s mother, who strongly disagreed with her becoming a hockey player, is now the biggest supporter by coming to all the tournaments to cheer for her.