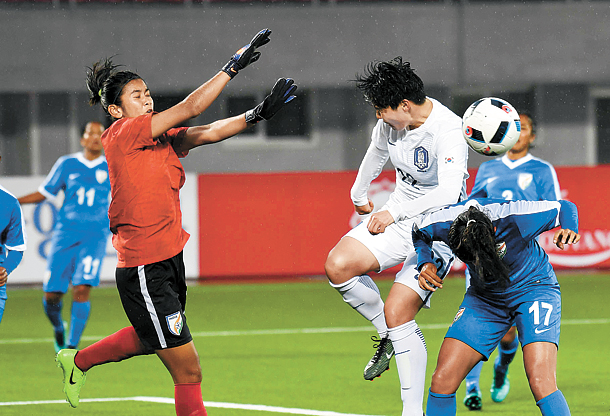 South Korea made a victorious start to their Asian Football Confederation (AFC) Women’s Asian Cup qualifying campaign in North Korea on Wednesday as they trounced India 10-0.

South Korea, led by head coach Yoon Duk-yeo, poured out five goals in each half against India to collect their first win in Group B, where they are also paired with North Korea, Uzbekistan and Hong Kong. All Group B matches are staged at Kim Il-sung Stadium in Pyongyang.

The qualifying campaign will run until next Tuesday and only the group winner will advance to the 2018 Asian Cup in Jordan, which also doubles as the qualifying tournament for the 2019 FIFA Women’s World Cup.

North Korea is currently the leader with two straight victories. The hosts of the tournament routed India 8-0 in their opener on Monday and beat Hong Kong 5-0 earlier Wednesday.

Forward Lee Geum-min then grabbed a brace to give a comfortable cushion for South Korea on a rain-soaked pitch. She first beat Indian goalkeeper Panthoi Chanu in the 29th before scoring again seven minutes later. Yoon’s side closed the first half with a goal from defender Lee Eun-mi in the stoppage time.

In the second half, South Korea scored four goals in a span of four minutes. You Young-a’s opened the scoring in the 65th and Lee Geum-min completed a hat trick with her goal in the 67th.

South Korean captain Ji So-yun then put her name on the score sheet in the 68th followed by a second half substitute Lee So-dam a minute later. Ji rounded off the scoring for South Korea in the second half extra time to make the score 10-0. The Chelsea Ladies forward now has 43 goals in 92 matches for South Korea.’ 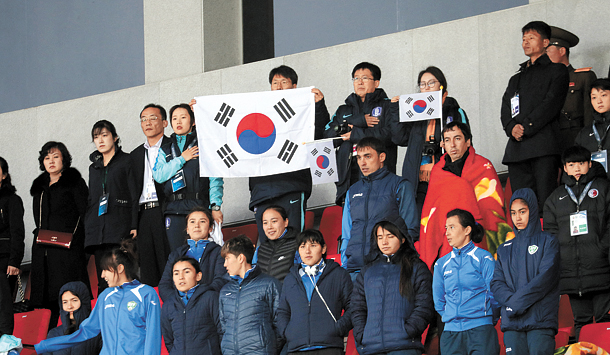 South Korea will next face North Korea on Friday. The winner of the much-anticipated all-Korean showdown is expected to clinch the top spot in the group considering that neither the South nor the North are likely to lose to low-ranked competitors.

The South Korean squad landed in Pyongyang on Monday after receiving visas from the North Korean embassy in Beijing. Any trip to the North requires the South’s approval, as well as the North’s consent, as the two Koreas have technically remained in a state of war since the 1950-53 Korean War ended in a truce, not a peace treaty. The Seoul government last month gave the green light to the football team’s visit to Pyongyang after the North assured the safety of the South Koreans via the AFC.