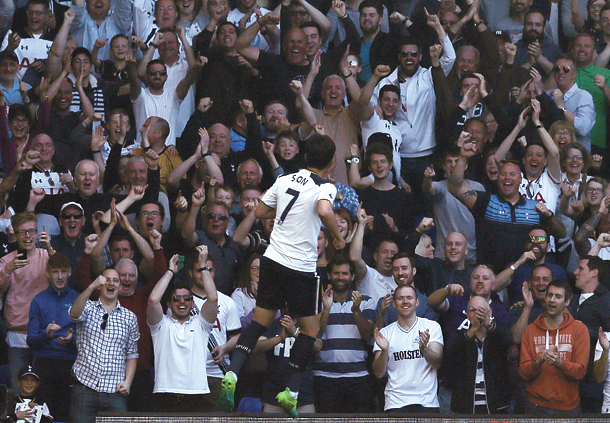 Son Heung-min of Tottenham Hotspur celebrates after scoring a goal during an English Premier League football match against Watford FC at White Hart Lane in London on Saturday. [AP/YONHAP]

The goal made Son the first Asian footballer to net more than 10 goals in a single EPL season. Including his goals in the FA Cup and UEFA Champions League, Son’s personal season record now stands at 18.

His first major play in Saturday’s game was at the 33rd minute, when he assisted Dele Alli’s goal. The team’s second point came at the 39th minute from Eric Dier.

It was Son who carried Spurs to a four-point wipeout over Watford. His first goal came right before halftime at the 44th minute, when he scored with a left-foot strike, and his second was at the 55th minute, assisted by Kieran Trippier.

With his two goals and one assist, the Korean forward was already the top performer that day. Son had two more opportunities to score during the game, which would have given him his first hat trick in the English Premier League, but he fell short of a third goal and concluded play time at the 88th minute, when he was replaced by Joshua Onomah.

“I just want to score a hat trick in the Premier League,” Son said during his postgame interview with Tottenham Hotspur. “Maybe it will happen next week, I just have to be ready. Of course I’m happy though because it was a good win, an important three points and we deserved it.”

Before playing for Spurs, the 24-year-old Son made his bones in the German Bundesliga, with a three-year stint at Hamburger SV and three seasons with Bayer Leverkusen. While playing for Leverkusen in the 2014-15 season, Son set his previous record of 17 goals.

At the end of August 2015, Son signed a five-year contract worth $27.2 million with Tottenham Hotspur, becoming the most expensive Asian football player in history. During his first season with the U.K. outfit, he made eight goals, and it’s only been uphill from there. This season has been his best by far, with multiple records set.

Son has seven EPL games left in the season and eight more possible matches in the FA Cup. He’s now trying to chase his forerunner Cha Bum-kun, who holds the season record for Korean players in Europe with 19 goals scored in the 1985-86 season while playing for Bayer Leverkusen.

In the English Premier League, Son is currently tied for 12th with 11 goals, two behind the 10th-ranked scorers. He’s already far outpaced the previous Korean record holder, Ki Sung-yueng of Swansea City, who scored eight goals in the 2014-15 season.

Spurs’ wipeout against Watford on Saturday was the club’s sixth consecutive win and cemented their EPL standing in second. Their record stands at 20 wins, eight ties and three losses with 68 points.

Tottenham Hotspur will next play AFC Bournemouth, 15th in the EPL, at White Hart Lane in London on Saturday.