Thunders rebound to even the score with KGC

Thunders rebound to even the score with KGC 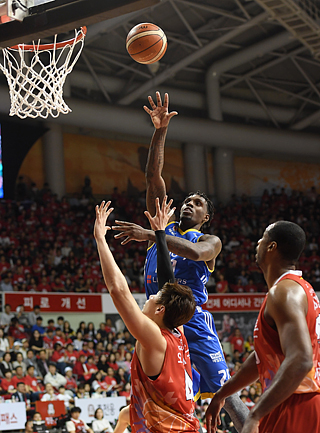 Ricardo Ratliffe of the Seoul Samsung Thunders attempts a goal during the second post-season championship game against Anyang KGC on Sunday. [KBL]

After losing their first game to Anyang KGC 86-77 on Saturday, the Seoul Samsung Thunders responded with a win on Sunday to bring the championship match back to a 1-1 tie at Anyang Gymnasium over the weekend.

With 4 minutes and 48 seconds remaining in the first quarter, Lee Jung-hyun of KGC knocked Lee Kwan-hee of the Thunders to the ground. Lee Kwan-hee then shot back up and shoved Lee Jung-hyun, unable to resist his anger.

Both players were removed from the game for unsportsmanlike conduct.

Mirroring this conflict, the two teams played an uncompromising match. If the KGC were to win their second game, it would have been a challenge for the Thunders, since any team that wins the first four of its seven games therefore wins the postseason championship.

It seemed as if the KGC was undefeatable until Sunday, when the Avengers started to crack, with Sykes absent from the game due to an ankle injury, and the Thunders took advantage of it.

Despite the absence, the KGC kept up with the Thunders until the fourth quarter, when Simon was fouled out with five fouls. After, Ratliffe actively got under the goal net, with the help of Lim Dong-seob, who scored 18 points throughout the game.

The Thunders have played 12 games so far in the postseason championship, making them a lot more physically tired compared to the KGC, who played five games.

“In professional basketball, you should foul within restrictions,” Kim Seung-ki, manager of the KGC, said after the game.

“I think he just exploded from having to deal with Lee Jung-hyun’s habit of inducing other players to foul,” Lee Sang-min, manager of the Thunders, said after the game.

The two teams will play their next two games at the Jamsil Arena starting on Wednesday at 7 p.m.