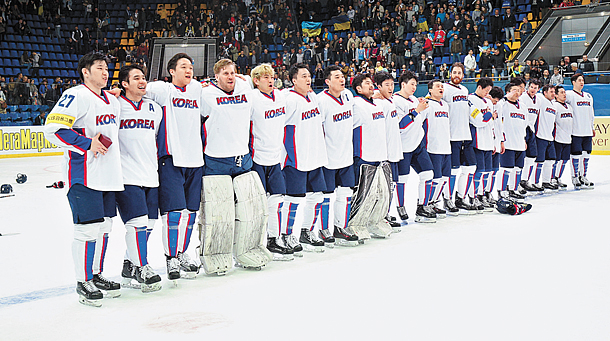 Members of the Korean men’s ice hockey team sing the national anthem after beating Ukraine 2-1 at the IIHF Division I Group A World Championship in Kiev, Ukraine, on Friday. [KOREA ICE HOCKEY ASSOCIATION]

It wasn’t too long ago when the Korean men’s ice hockey team was the laughingstock of the world.

During the 1990s and even into the 2000s, the national team’s skill level was on par with club teams in other countries. In fact, during an off-season training game in 1990, the Korean men’s team lost to a small club team in Canada 8-1.

Even prior to the IIHF Division I World Championships in Korea in April 2014, Rene Fasel, president of the International Ice Hockey Federation, couldn’t guarantee Korea’s spot in the 2018 Winter Olympics, in which the host country usually gets an automatic berth. Even though Korea is hosting the next Winter Games, the ice hockey team just wasn’t competing at the level of the world’s top teams.

And they certainly proved their unworthiness during the event, falling to Ukraine 8-2, and losing all five of its matches. The team was relegated to Division I Group B, and from this humiliation, Korea hired a new head coach, Jim Paek, and accepted more naturalized athletes to the team.

With steady progress, Korea was ultimately given its berth in the 2018 PyeongChang Winter Olympics.

In their most recent game on Saturday, the men’s team faced Ukraine, the country that had routed them to Division I Group B three years ago, and defeated them 2-1 to finish runner-up in Division I Group A. The rank earned them a promotion to the top division of next year’s IIHF World Championships. Before their match against Ukraine, the Korean team also bested Kazakhstan, Hungary and Poland.

The IIHF’s top division comprises traditionally strong ice hockey countries like Canada, Russia and the United States. Competing against them is considered a “dream stage” for teams in the lower divisions. There are five lower divisions, and countries in each jockey for a promotion to the next level. In the IIHF’s 80-year history, it’s been unusual for a team in Division I Group B to advance to the top division in just two years as Korea has done.

Considering the condition of men’s ice hockey in Korea - there are only 233 players across six high school teams and three professional teams - the national team’s feat is close to a miracle. 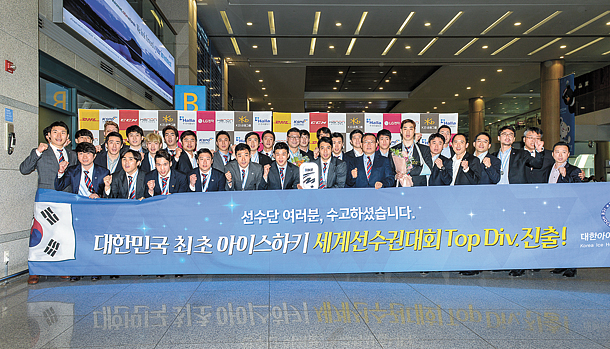 When Paek, a former NHL defenseman, was first appointed head coach, he evaluated the members’ strengths and weaknesses. He then drew up a playbook with detailed tactics for different situations and handed it to each player on the team. The Korean athletes may be physically smaller than players on other teams, but Paek constantly points out that they’re capable of big plays. During the team’s match against Hungary, Shin Sang-hoon, who stands at 1.71 meters (5 feet 7 inches), made an outstanding assist when he landed the puck into the goal with a slap shot.

The support of Chung Mong-won, chairman of Halla Group and president of the Korea Ice Hockey Association, has also played a big role in the team’s development. Chung created the professional hockey team the Mando Winia, now the Anyang Halla, in 1994, and fought to keep it afloat during the 1997 financial crisis. After he was appointed president of the KIHA in 2013, he donated 5 to 6 billion won ($4.4 to 5.3 million) each year to the Anyang Halla and 1.5 billion won to the KIHA.

At the upcoming Olympics, Korea has been assigned to group A with Canada, the Czech Republic and Switzerland.

“Winning a gold medal at the PyeongChang Olympics is our goal,” Paek said. “We want to win all the games and make people proud.”