Dinos’ Na bridges the gap between veterans and rookies

Dinos’ Na bridges the gap between veterans and rookies 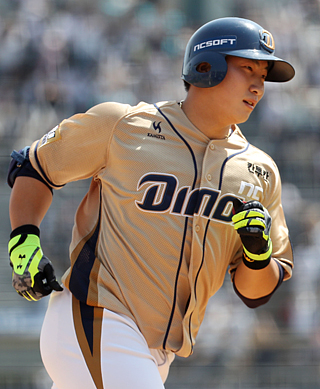 Na Sung-bum started his professional career in 2012 with the NC Dinos, who at the time were also making their debut in the Korea Baseball Organization (KBO).

After playing at Yonsei University as a pitcher, Na started his professional career as a hitter. He set many of the team’s first records: first to hit 20 home runs, first to steal 20 bases and first domestic player to win the Golden Glove Award in 2014.

Adding to his accomplishments, Na also hit his 100th career home run during the game against the Samsung Lions on May 7. Though there are a number of domestic players that have hit 100 career home runs, Na is the only player to achieve that record while playing for one team, the Dinos.

Through the past five seasons, as Na was busy trying to survive in the KBO, he became the team’s star player and a recognized hitter in the league. Aside from his personal success, this season Na hopes to become a role model for younger players.

“I was once the youngest on the team, but now, I’m heading towards the middle,” Na said. “I’m at a position on the team where I should support the veteran players and lead the rookies.” 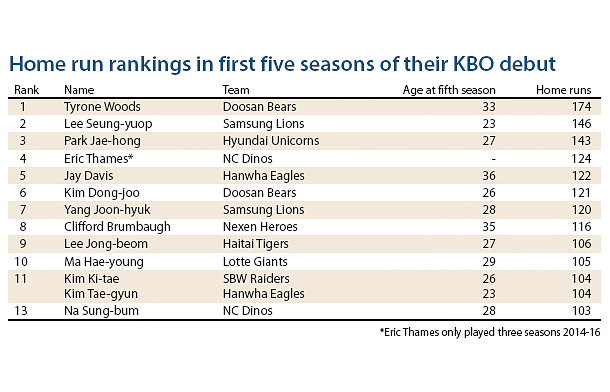 As a result, when the Dinos left for spring camp prior to the start of the season, he began to act more as a bridge between these two groups and to improve communication.

“Rather than talking to them in a large group, I try to have casual conversations with each player one at a time,” Na said. “To be a good example to the rookies, I need to improve on what I was lacking.”

Aside from Na’s dominance on the field, this year he hopes to find his role in the locker room.

“It feels like yesterday when I made my debut,” Na said. “When I look at my home run infographic, it brings back a lot of memories.”

To achieve 100 home runs, Na hit consecutive and bases-loaded home runs, but he has not yet hit a game-ending home run. He had a number of hits that eventually led to the team’s win, but never had a run in the ninth or extra innings that ended the game.

“There were chances,” Na said, “but I never got to take them.”

His next goal is to hit 200 home runs - until then, he hopes to have his first game-ending home run.