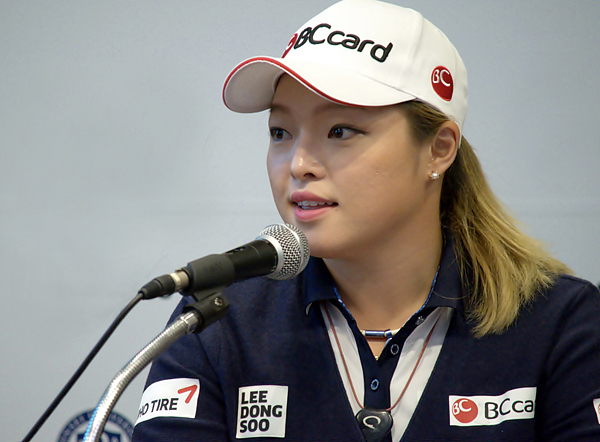 Jang Ha-na speaks during a press conference regarding her return to the KLPGA tour in Seoul on Tuesday. [YONHAP]

After a surprise announcement that she would be returning to Korea on Monday, Jang Ha-na, the No. 10 player in the world, held a press conference in Seoul on Tuesday to speak about the reason behind her return.

Since the TOTO Japan Classic last year, Jang has considered coming back. When Jang made her LPGA tour debut in 2015, her parents had to be separated as her father travelled with Jang to all the tournaments and her mother stayed in Korea by herself.

“I thought being the world’s top golfer was my only goal,” Jang said at a press conference. “But I didn’t feel comfortable when I thought about my parents.”

Jang, who earned her LPGA tour card through qualifying school in 2014, made herself known to the world of golf in 2016, winning three tournaments, the most number of wins in a season among Korean players. Following a successful season, Jang continued her success in 2017, winning the ISPA Handa Australian Women’s Open in February.

“I haven’t been playing well since the Australian Open,” Jang said. “By the time I become the world’s No. 1 golfer, I’ll be in my 30s and my parents will be in their 70s.”

After a win, Jang played in three KLPGA tour events but quickly returned to the United States to play in Citibanamex Lorena Ochoa Match Play presented by AeroMexico and Delta. However, upon completion of the event, Jang returned to Korea and hasn’t played in any tournaments since then.

There was a case where a player, Baek Kyu-jung, returned to the KLPGA tour after playing poorly, but there was never a player who returned to the domestic tour while they were at their best.

When Sportizen first announced her return, many questioned if Jang lost her goal as a golfer to continue her career, but she made it clear that her decision was based on her priorities in life.

“If I didn’t have set goals, I would have quit golf,” Jang said. “I only knew of golf when I was little. I may become a successful player, but I was worried that I may be losing my friends or my family once I become the world’s top golfer.”

Jang referred to her return to the KLPGA tour as a turning point in her athletic career. Although it is possible for Jang to go back to the LPGA tour, as of now, she said it won’t be easy for her to make another decision in going back to the LPGA.

Throughout her three seasons in the LPGA tour, she had success and achievements, but she also had to go through a rough time in 2016 regarding an odd incident with fellow golfer Chun In-gee. Prior to the HSBC Womens’ Champions event, Chun was hit in the lower back after Jang’s father lost his grip on a 15 pound travel back while riding an escalator at Singapore’s Changi Airport.

Jang’s ceremony after the win upset Chun’s fans and as an aftereffect of the incident, Jang was absent from the LPGA tour for several weeks. When questions regarding the incident were brought up, Jang made it clear that the incident had nothing to do with Chun.

“I did have a hard time, but my decision has nothing to do with the incident,” Jang said. “And I’ve already talked to Chun In-gee about it. My main reason in returning to Korea is because I found something more valuable than golf.”

“Now, I want to have a more enjoyable golf life having my parents and other important people next to me.”