Korea becomes first team to enter the round of 16

Korea becomes first team to enter the round of 16 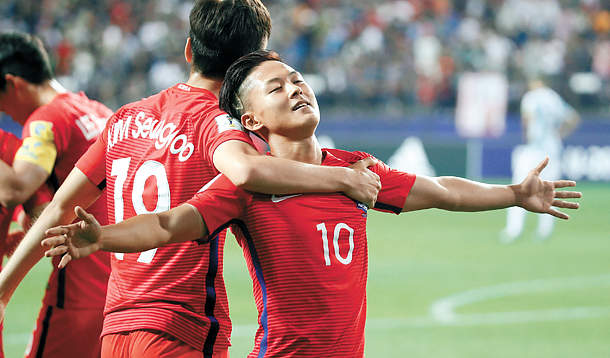 Lee Seung-woo celebrates after scoring Korea’s first goal in the 18th minute during U-20 FIFA World Cup Group A match against Argentina at Jeonju World Cup Stadium in North Jeolla on Tuesday. With the final score of 2-1, Korea advanced to the round of 16. [YONHAP]

The U-20 Korean national football team became the first among the 24 teams participating at the U-20 FIFA World Cup to advance to the round of 16 after a 2-1 win against Argentina on Tuesday at Jeonju World Cup Stadium.

Once again, the Barcelona duo, Lee Seung-woo and Paik Seung-ho, excelled, each scoring a goal for Korea. Lee gave an early lead to Korea in the 18th minute as he passed through Argentine’s defense from the half line and chipped the ball over Franco Petroli, the goalkeeper. Then in the 42nd, Paik successfully converted a penalty kick into Korea’s second goal to extend their lead against Argentina.

Marcelo Torres scored Argentina’s first goal in the 50th to trail Korea by one but Son Bum-keun, the goalkeeper, played a significant role in maintaining Korea’s one goal lead by blocking Argentina’s several goal attempts towards the end of the game with accurate positioning and steady ball play.

“I was worried throughout the entire game since we were playing against Argentina, considered the world’s best team,” Shin Tae-yong, head coach of the U-20 Korean national football team, said. “Now, I felt like our team was enough to compete against the world’s best teams.” 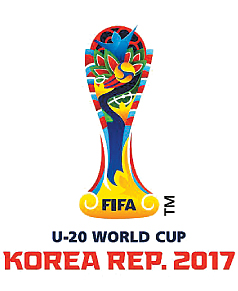 It was the team’s strategy that led to a win. Rather than keeping the back-four system that the team used against Guinea, Shin used a back-three system against Argentina. In between the center-back duo, Lee Sang-min and Jeong Tae-wook, Kim Seung-woo got in to complete the team’s three back.

In addition to the three, while at defense, Shin had Yoon Jong-gyu and Lee Yoo-hyun join the three to defend the danger zone. This formation allowed the strikers to care less about defense and focus more on scoring.

“We’ve been told that our defense was weak but based on our match against Argentina, we won’t be hearing that again,” Shin said. “Argentina was Argentina. We won in scores but they were very strong. I’m thankful to the players for playing well.”

With the team’s accomplishment, Lee received a great amount of attention once again. Mundo Deportivo, a Spanish sports newspaper, mentioned how Lee’s goal from the half line recalled Lionel Messi’s goal, which he also did from the half line during the 2015 Copa del Ray Final.

“I’m not at a level to be compared with Messi,” Lee said after the game. “Since we just started, we’ll try our best to make our way up.”

Aside from his role as the team’s main striker, he encourages players throughout the game and when unfair decisions are made, he’s the first to run up to the referee. Lee’s positive personality helps the team’s atmosphere.

Through the U-20 World Cup, many famous football players made their names known to the world of football. That said, multiple European league clubs made their visits to Korea to watch them play.

Next year, Lee’s contract with Barcelona will end and some of the famous teams have already started to try to recruit Lee. Though Lee has his second act of his football career waiting for him, he is only focusing on the U-20 World Cup as of now.

“Since Korea has never won all three group matches, I’ll be happy if we can advance to the round of 16 without losing a game,” Lee said.

Along with the two wins in Jeonju, Korea is currently ranked first in Group A with six points, two points ahead of England. Since Korea is first with one more game remaining, regardless of the result of the match against England, they will advance to the round of 16. It is a record for the U-20 Korean national football team to seal their spot in the round of 16 after only playing two games since the event was first held in 1977 in Tunisia.

“Our first goal was to finish the group match second with two wins and one tie,” Shin said after the game. “We’ve gotten as close as 80 percent to our goal. We still have one more game remaining in the group so we’ll try to our best to at least tie the game or to win.”

Only the top two teams from each group, six groups of four, will earn an automatic berth into the round of 16. Four teams finishing third in each group will also be given a spot to the round of 16 through addition matches. Their match against England will kick off on Friday at Suwon World Cup Stadium at 8 p.m.