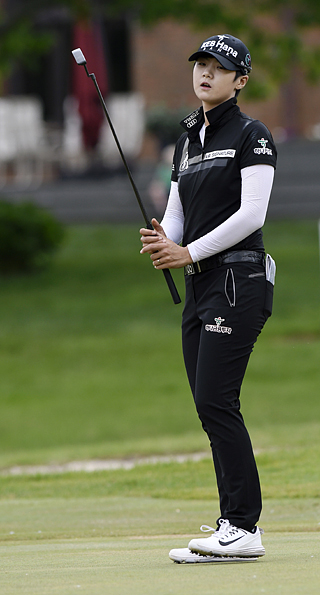 Park Sung-hyun watches her putt during the final round of the Volvik Championship at Travis Pointe Country Club in Ann Arbor, Michigan on Sunday. [AP/YONHAP]

Park, who was the leader after the second round, started her final round four shots behind Feng Shanshan of China. Park’s even-par on the third day cost her to drop to fourth, but it only took Park a day to get back in the game, shooting another bogey-free round of 66 in her final round, finishing the event tied for second with Lee Min-jee of Australia at 18 under-par, 270.

But despite playing her best, Park finished one shot shy of forcing a playoff.

“I hadn’t played well in events prior to this tournament and I felt I’d lost a bit of confidence,” Park was quoted as saying by Yonhap. “But I played well this time and got some confidence back. I think that was the biggest takeaway from this event.”

Though Park missed her chance to win her first LPGA tour event, she still managed to record her best finish of the season. Aside from her single season record, this is Park’s third runner-up finish on the LPGA tour since the 2015 KEB Hana Bank Championship and the 2016 Evian Championships.

After dominating the KLPGA tour and playing in seven LPGA tour events under invitation in 2016, Park received full-time status on the LPGA tour for the 2017 season without going through qualifying school as she finished 25th on the LPGA tour money list. And with her high world ranking at 11th, she was considered one of the LPGA tour’s super rookies.

In a total of nine tournaments so far in the season, Park had four top-ten finishes and has not yet missed a cut. Considering this is her rookie season, Park is playing above expectations, as she is fourth in the tour’s scoring average at 69.31 and second in average driving distance of 274.70 yards. Park is ranked first in the Louise Suggs Rolex Rookie of the Year race with 491 points, which is almost two times more than Angel Yin of United States, who is second. Despite her achievement, Park is still not satisfied with her performance.

“There’re still a lot of areas that I need to work on,” Park said. “I’m about 40 percent satisfied with my game. A lot of the people told me to forget about the achievement I made on the KLPGA tour, but it’s not that easy.”

Upon completion of the Volvik Championship, Park parted with her temporary caddie, Chris McCalmont, who caddied for Park in two tournaments after Park parted with Colin Canne. Starting with the ShopRite Classic, she will be continuing her LPGA tour career with David Jones, who used to caddie for Chun In-gee in 2016 and Choi Na-yeon from 2013 to 2015.

Feng ended up winning the tournament at 19 under-par. This marks Feng’s seventh LPGA tour victory and first in six months, since her back-to-back victory at the Sime Darby LPGA Malaysia and Toto Japan Classic in October, 2016. With her victory, the LPGA tour is yet to have a multiple winner this season.

The Volvik Championship was the LPGA’s 12th tournament of the season and this is the first time since 1991 that the tour does not have multiple winners by or before the 10th event.

Once Lydia Ko, ranked No.1 in the world, announced that she will be taking a break for the next three tournaments, a lot of the attention went to whether the World’s No.1 spot will be replaced this week. Since the second and third ranked players in the world, Ryu So-yeon and Ariya Jutanugarn of Thailand, are less than 0.5 points from Lydia Ko in Rolex World Ranking, it was an opportunity for Ryu or Jutanugarn to become the new world’s top golfer.

Without a multiple winner, the LPGA tour will continue its season at the ShopRite LPGA Classic Presented by Acer starting from Thursday through Sunday.