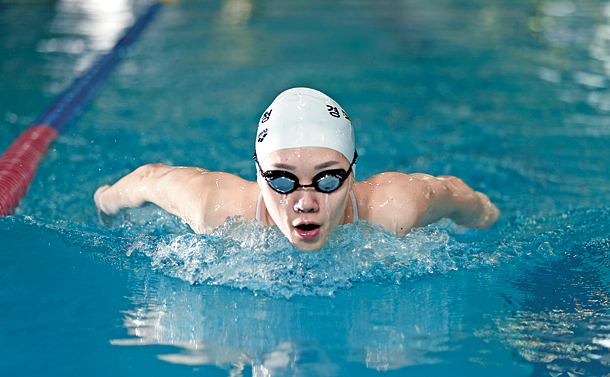 When people at the swimming pool see Kim Seo-yeong, not many think she is a professional swimmer on the Korean national team. 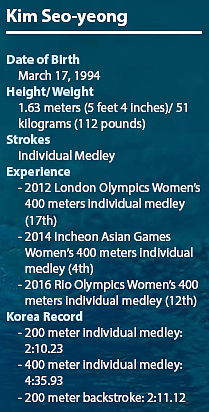 Kim’s coach even mentioned that it is hard at times to find Kim when she’s with all the other swimmers at a meet since she is so petite.

But her recent accomplishments leave fans in awe, as she has been Korea’s record setter in the women’s 200 and 400 meter individual medleys and the women’s 200 meter backstroke.

Kim’s rise began in August 2016 at the Rio Olympics. At the time, Kim’s time was good enough to tie with Korea’s record in the women’s 200 meter medley, but it wasn’t good enough to advance to the final.

“Seo-yeong has great buoyancy,” Kim In-gyun, Kim Seo-yeoung’s swimming coach, said. “So she doesn’t get tense when swimming. Also, being petite allows her to be more flexible and faster than foreign swimmers.”

Kim Seo-yeong started swimming at age five and never thought of becoming an elite swimmer when she first started. But once she started winning medals in swim meets in elementary school, she began to dream of being on the national team.

Kim got on an elite course to be a swimmer while in the fifth grade, attending Cheoncheon Elementary School in Suwon. But her small physique has always been a problem, causing her to make bigger shoulder rotations and kick harder, leading to shoulder and knee injuries throughout her junior career.

It took until 2013 for her to realize the importance of long-term training.

“I learned that I needed to build physical strength after injuries rather than continuously making excessive motions to create speed,” Kim said.

Since then, Kim focused on weight training for three years, which allowed her to improve her strength by 30 to 40 percent.

“The top ranked individual medley swimmers are the ones already at their best,” Kim In-gyun said. “But Seo-yeong is slowly improving her record by a second every year. If she continues to follow a structured training program, she may have a shot at being the first female Korean swimmer to win a medal at the 2020 Tokyo Olympics.” 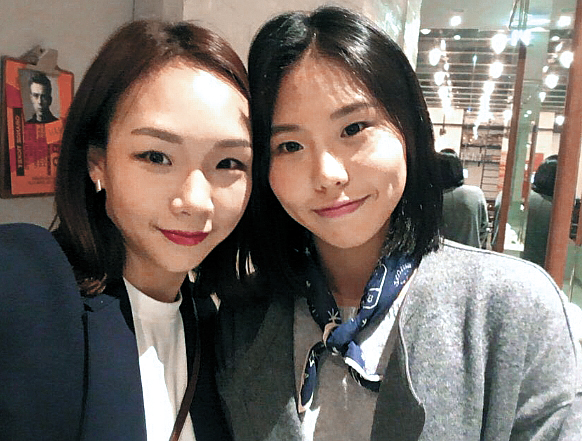 Kim goes through a tough training session each day, where she spends about 10 hours in the water, and An Se-hyeon has been the biggest driving force behind this.

An, a butterfly specialist, has made significant improvements after training under Michael Ball since 2015, Park Tae-hwan’s swimming coach.

On Sunday, An won a silver medal in the women’s 100 meter butterfly at the 2017 Mare Nostrum Swimming Circuit in Canet-en-Rousillon, France. An’s time of 57.28 was good enough to set a new Korean record and the fourth fastest time in the World ranking.

“Se-hyeon is a great friend that motivates me to word harder,” Kim said. “Although I can’t see her much, as she is in Australia for her offseason training, we promised each other to win a medal at the Olympics.”

Up until a few years ago, Kim was never at a level to dream about winning a medal, even at the Asian games.

But thanks to her offseason training in Japan, where she got to watch swimmers similar to her size compete in international events, she gained confidence.

“Watching them, I felt like I could do it,” Kim said.

Starting on July 14, Kim will be competing at the FINA World Aquatics Championships in Budapest, along with Park, who departed to Rome on Sunday.