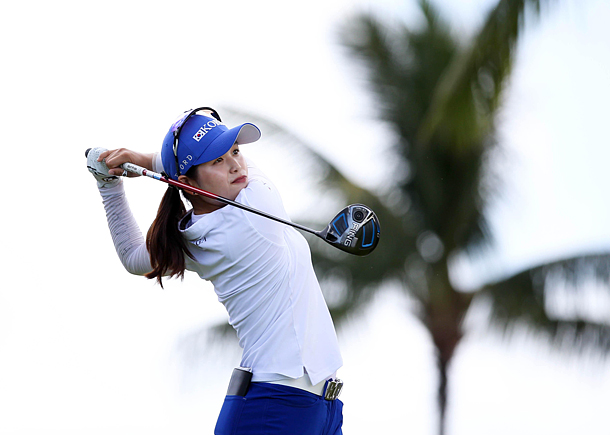 Choi, who is a member of the Korean national team, started the final round tied for tenth but set a course record on Sunday, shooting nine under par.

Everything, from putting to shots, worked perfectly for the day - Choi’s final round included two eagles and five birdies.

Choi got off to an early start with a birdie on the second. Shortly after that, Choi made an eagle on the fifth, par four, by hitting the green with a tee shot. Then, she made two additional birdies to finish her front nine at five under par, which put Choi right behind the leader, Kim Ji-hyun. 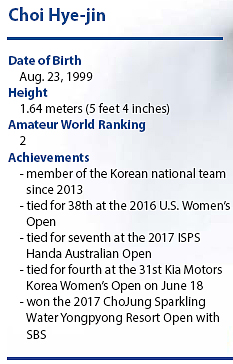 It wasn’t until the 16th hole that she was given an opportunity to take the lead. Choi, who consistently made par until the 12th, made back-to-back birdies on the 13th and 14th hole. Then, on the par four 16th with a little bit of luck, Choi’s second shot bounced in to the hole for another eagle to take a one shot lead ahead of Kim and Cho Jeong-min.

With Choi back in the clubhouse holding a one shot lead, Cho and Kim were given a last opportunity to force a playoff, but failed to do so as both of them finished their last four holes hitting par.

Aside from a course record, Choi also set a tournament record, replacing Ko Jin-young’s 13 under-par set at the tournament in 2015. As an amateur, Choi wasn’t able to accept any prize money, but she will be eligible to become professional after her 18th birthday on August 23. If she decides to go pro, Choi will be given a full exemption for all KLPGA tour events in the 2018 season because of her victory this weekend.

With two more KLPGA tour exemptions, it is likely that Choi will wait until September to go professional.

Choi is currently ranked second in the World Amateur women’s ranking. As an amateur, she has already competed in a number of professional events including the LPGA tour, having qualified for the U.S. Women’s Open for two consecutive years. During her first U.S. Women’s open appearance last year, Choi finished tied for 38th.

In both of her LPGA tour events this season, Choi managed to make the cut, finishing tied for 30th at Lotte Championship in April and tied for seventh at ISPS Handa Women’s Australian Open in February.

Kim, who briefly had the lead during the final round, finished runner-up with Cho at 13 under par. Though Kim lost her shot at winning her fourth tournament of the season, both Cho and Kim were able to split the winning purse as Choi is still an amateur.

Choi He-yong, co-leader after the second round, finished tied for tenth by shooting three over par on the final day, finishing at seven under par for the weekend.