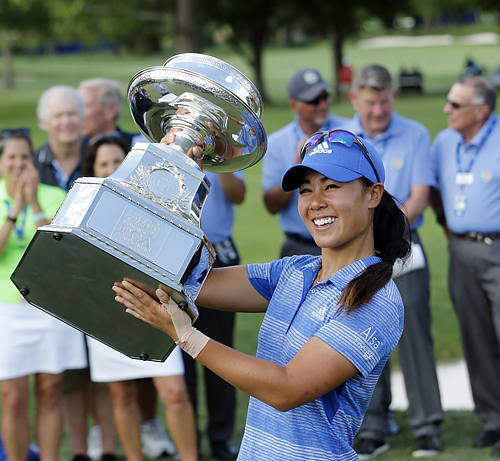 Danielle Kang holds the trophy after winning the KPMG Women’s PGA Championship at Olympia Fields in Illinois on Sunday. [AP/YONHAP]

After playing in a total of 144 LPGA tour tournaments, Danielle Kang finally captured her first professional victory at the KPMG Women’s PGA Championship at Olympia Fields in Illinois on Sunday.

Kang shot three under par on the final day, with three bogeys and six birdies, to finish the weekend 13 under par. It was quite an unpredictable round, until the last hole between Kang and Brooke Henderson of Canada, the defending champion. Both Kang and Henderson were tied for the lead after the front nine at 10 under par, but as Kang made a bogey on the par four tenth, Henderson took the sole lead.

“The three-putt on No.10 was the turning point for me,” Kang said after the round as quoted on the LPGA website. “I said I’m going to learn from that and then I made four birdies in a row.”

Just as Kang said, the bogey might have triggered her to play better, making four consecutive birdies from the par four 11th, allowing her to top the leaderboard once again. However, Kang’s sole lead didn’t last long, as Henderson, who played a group ahead of Kang, birdied the last hole to tie the lead again. 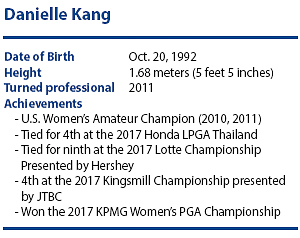 Both Kang and Henderson tied at 12 under par - Kang hit the green on two from 233 yards on par five 18th. Then Kang two-putted to finish one shot ahead of Henderson.

“Having a major championship on my resume, I don’t know what it will do,” Kang said after the round, as quoted on the LPGA website. “But I do know that having won the U.S. Amateur a major tournament, and having a major win - it’s amazing.”

With her first victory being the LPGA’s major tournament, she has won $525,000.

Kang was once the best amateur golfer, and she won the U.S. Women’s amateur in 2010 and 2011. But once she turned professional, she did not stand out on the LPGA tour and never got close to winning in her first five seasons.

Aside from Kang’s golf game, her story about her father has received a lot of attention. Kang’s father died from brain and lung cancer in 2013, Kang’s second season on the LPGA. The two had quite a close relationship when it comes to golf, as Kang’s father caddied for her when she won the U.S. women’s amateur in both 2010 and 2011. This time, it was Kang’s mother who walked through the entire round to watch her win.

“I’m so blessed to have her with me, for her to witness my first win, because she actually didn’t get to watch me win the Ams,” Kang said, as quoted on Golf Channel.

Korea’s golfers once again had a strong showing this weekend, having five players finishing inside the top ten, but came up short of winning. Chella Choi, the leader after the third round, shot an even par round of 71 to finish third in the field.