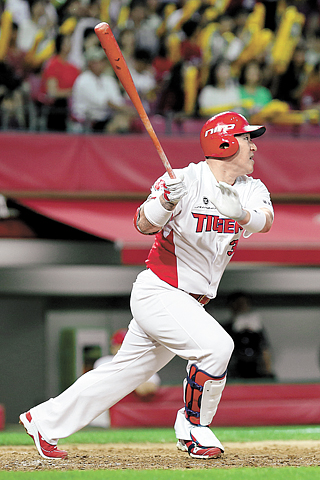 Choi Hyoung-woo of the KIA Tigers received the most fan votes to earn a spot on the KBO’s All-Star Nanum team. [YONHAP]

The starting lineups for the KBO All-Star Game were announced Monday, with a slugging outfielder from the Kia Tigers finishing with the highest number of votes.

The Korea Baseball Organization (KBO) unveiled the list of 12-man rosters for the Dream and Nanum All-Stars.

The 10 clubs were divided into two sides: the Doosan Bears, Samsung Lions, SK Wyverns, Lotte Giants and KT Wiz for the Dream All-Stars, and the NC Dinos, Nexen Heroes, Hanwha Eagles, Kia Tigers and LG Twins for the Nanum All-Stars.

The players were selected based on votes cast by fans and fellow players, and the totals were converted into points.

Tigers outfielder Choi Hyoung-woo led all players with 54.95 points. He received more than 1.18 million votes in fan voting to lead the 120 candidates for the All-Star Game.

Choi, who is the first player in the KBO to ink a 10 billion-won ($8.73 million) deal, is batting .366 with 18 home runs and 69 RBIs in 77 games this season to help keep the Tigers sitting on the top of the league. He is the leader in RBIs, second in batting average and fourth in home runs, as of Monday. 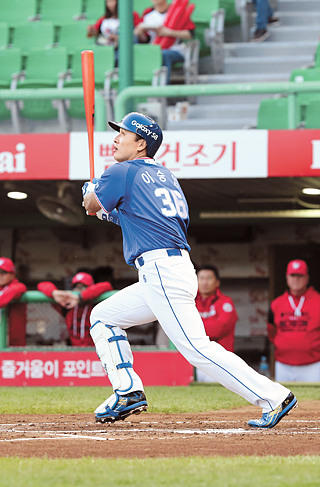 Lee Seung-yuop of the Samsung Lions earned his spot on the KBO’s All-Star Dream team for the 11th time. [YONHAP]

The players from the Tigers won eight of the 12 positions available for the Nanum All-Stars. With Choi and Roger Bernadina taking the outfielder positions, An Chi-hong will play at second base, accompanied by Lee Bum-ho at third base, Kim Sun-bin at shortstop and Kim Min-sik behind the plate. Yang Hyeon-jong will be the starting pitcher, and Kim Yun-dong was voted on as the middle reliever.

Other Nanum All-Stars are Kim Tae-kyun of the Eagles as the designated hitter, Lim Chang-min of the Dinos as the closer and Wilin Rosario of the Eagles as the first baseman. Lee Jung-hoo of the Heroes will play in the outfield, and he is set to become the youngest player to perform at the All-Star Game at the age of 18, surpassing the record held by An Chi-hong, who made his All-Star Game debut in 2009 at 19.

For the Dream team, the two-time defending champion Bears dominated the All-Star voting. Dustin Nippert will start the game and will be throwing to his regular catcher Yang Eui-ji.

Lee Hyun-seung was selected as the middle reliever, with Choi Joo-hwan at second base and Kim Jae-ho at shortstop. Min Byung-hun took one of the three outfielder positions, and will play alongside Koo Ja-wook of the Lions and Son Ah-seop of the Giants.

Lee Dae-ho of the Giants will serve as the first baseman for the Dream All-Stars. The former Seattle Mariners man topped the players’ voting after winning 205 votes from 294 players.

Choi Jeong of the Wyverns will play at second base, while the Wiz right-hander Kim Jae-yoon will serve as the closer for the Dream All-Stars.

There are seven first-time All-Stars this year. The managers for each team, Doosan’s Kim Tae-hyung for the Dream All-Stars and NC’s Kim Kyung-moon for the Nanum All-Stars, will select an additional 12 players each Wednesday.

This year’s All-Star Game will take place at Samsung Lions Park in Daegu on July 15.