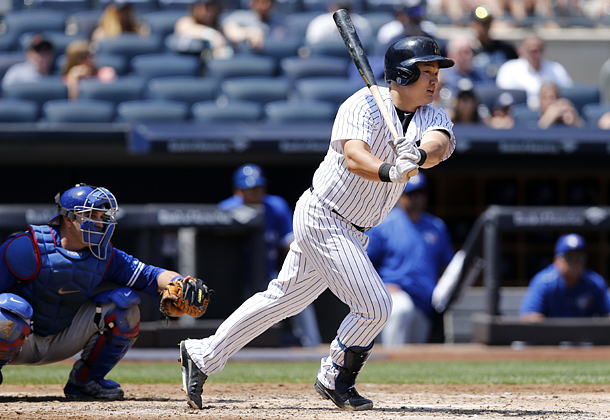 Choi Ji-man of the New York Yankees watches his home run against the Toronto Blue Jays at Yankee Stadium on Wednesday. [AP/YONHAP]

Choi Ji-man made quite a debut with the New York Yankees, hitting a two-run home run against the Toronto Blue Jays at the Yankees Stadium on Wednesday. Despite Choi’s home run, the Yankees lost 7-6.

Choi, who made his first appearance this season wearing the Yankees’ uniform, played as the seventh batter and first baseman. Choi recorded one hit and two runs. 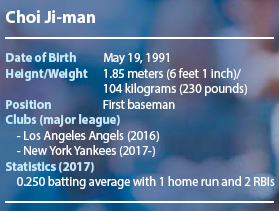 While the Yankees were losing 5-2 at the bottom of the fifth, Choi hit Marco Estrada’s 146 kilometers per hour fastball over the center right fence. According to MLB’s Statcast, Choi’s home run went as far as 457 feet at 180 kilometers per hour, the 43rd longest home run in the MLB this season.

After graduating from Incheon Dongsan High School, Choi left for the United States after signing with the Seattle Mariners in 2009. Then, in 2014, Choi signed a minor league deal with the Baltimore Orioles, but transferred to the Los Angeles Angels in December 2015 under the Rule 5 draft, which prevents teams from having too many young players in the minor league.

While playing for the Angels, Choi played in a total of 54 games, recording a batting average of 0.170, five home runs and 12 RBIs. Following this, Choi once again signed a minor-league deal with the Yankees and played with the Triple A Scranton/Wilkes-Barre RailRiders, where he recorded a batting average of 0.289 with eight home runs and 43 RBIs. Choi got called up to the major leagues as a replacement for Chris Carter on Tuesday, becoming the second Korean baseball player, after Park Chan-ho in 2010, to wear the Yankees’ uniform.

Following Choi’s MLB debut, Park Byung-ho of the Rochester Redwings, a minor affiliate of the Minnesota Twins, is the only Korean player with an MLB contract currently playing in the minors. Park, who is now in his second year in the United States, signed a four year, $12 million contract with the Twins on December, 2015. During Park’s first season in the majors he recorded a batting average of 0.191 with 12 home runs and 24 RBIs in 62 games. Due to his poor performance, he got demoted to the minor league and hasn’t made his way back up to the majors since.

“One of the reasons the Twins didn’t bring Byung Ho Park up north - after a strong camp - was to give Kenny Vargas at bats,” explains the Minnesota Star Tribune. “Vargas was to get his chance this year, and has blown it.”

Though Paul Molitor, manager of the Twins, said Park’s assignment in Triple A was temporary, he hasn’t been called up to the major leagues yet. Park had to miss a few games due to a hamstring injury at the beginning of the season but aside from that, he has recorded a batting average of 0.247 with four home runs and 25 RBIs as of Wednesday.

Despite the expectations Molitor had for Vargas, due to poor performance he is now in the Triple A alongside Park. That said, if the Twins are in need of a designated hitter, Park may be given his shot at getting promoted to the major leagues.