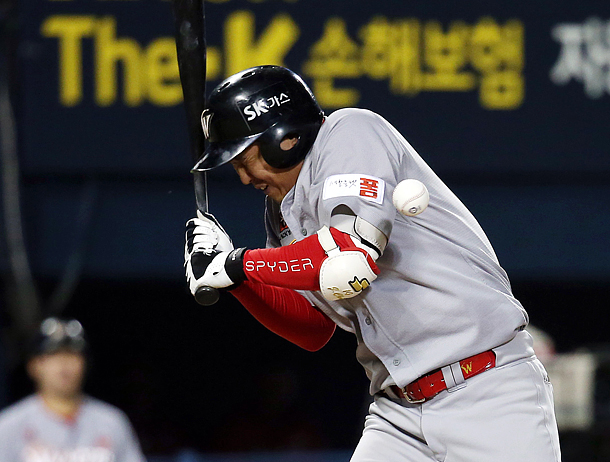 After being hit by another pitch during the game against the LG Twins on Tuesday, Choi became the first KBO player to be hit by 200 pitches. [YONHAP]

Aside from leading the Korea Baseball Organization (KBO) in home runs, Choi Jeong of the SK Wyverns celebrated his 30th birthday on Tuesday by becoming the first player in KBO history to be hit by a pitch (HBP) 200 times.

In the history of Major League Baseball (MLB), Hughie Jennings, who played in the 1890s, leads the category for most HBP with a total of 287. Looking only at the 20th century, Craig Biggio of the Houston Astros leads the field with 285.

Throughout Biggio’s 20 year baseball career, he played only for the Astros and led the field with the most HBP five times in the National League. During the 1997 season alone, Biggio had a total of 34 HBP. Ron Hunt of the New York Mets set the season record with 50 during the 1971 season.

As his batting form allowed him to stand closer to home plate than other batters, getting hit by pitches occurred regularly throughout Biggio’s career. Even when a pitcher intentionally beaned him, he didn’t care much, considering the hit to be part of the game.

Choi’s reaction is very similar to Biggio. Even in a situation where there seems to be a clear intention to the hit, Choi doesn’t complain and just walks to first base. While the Wyverns were leading the LG Twins 2-1 in the beginning of fourth on Tuesday, Lim Chan-kyu’s pitch, thrown at a speed of 136 kilometers per hour (84.5 miles per hour), struck Choi’s left forearm.

“I really don’t know why I got hit by a pitch that many times,” Choi said. “I don’t get hit intentionally. But I am thankful for not getting serious injuries from the hits.”

Tuesday’s hit, which was Choi’s 200th HBP, could have been far more dangerous. He wasn’t wearing any protective gear and a hit to the face or another part of the arm could have had a life changing impact. Yet rather than getting angry, Choi just lowered his face and walked to first base.

“Since he actively engages in the game every time he gets in the batters box, I think he gets hit more,” Park Kyung-oan, the Wyverns’ second general manager, said.

Park knows about HBP as well as anyone, as he is ranked second in the category after Choi at 166.

“He doesn’t hesitate against a pitch that is thrown toward the body,” said Chung Kyeong-bae, batting coach for the Wyverns. “From this, he became a batter that can hit pitches thrown towards the body. He can handle different pitches.”

Generally, once a batter becomes conscious about HBPs they tend to lose balance in their batting. Choi is different.

“It is scary, but I tell myself not to get scared of the pitches toward the body,” Choi said.

Just like Biggio, who retired from the MLB recording a total of 3060 hits and having gotten hit the most, Choi is also overcoming his fear of pitches thrown toward the body by continuously making an effort to hit them.

“At worst, it can shorten the career of a baseball player,” Park said. “So I hope other players don’t set a new record in this category.”