Park Sung-hyun reads the line of her putt during the final round of the 72nd U.S. Women’s Open at Trump National Golf Course in Bedminster, New Jersey on Sunday. [AP/YONHAP]

Until the second round, Park was ranked 21st at one under par. But with a round of 67 on the third day, Park moved up to tie for fourth to start the final round three shots behind the leader, Shanshan Feng of China. 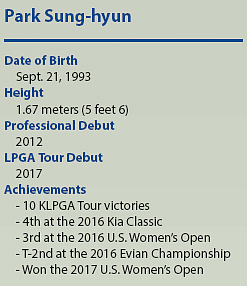 “I did not have the best first and second rounds,” Park said, as quoted on the LPGA website. “I wanted to believe in myself again for the final two rounds, and I did.”

In her final round, Park slowly moved her way up to the leaderboard, making three birdies and a bogey in the front nine to finish tied for second after the first half. While Choi Hye-jin made a bogey on the tenth, Park made a birdie on the 12th, sinking a six footer, to share the lead with Choi. Then, Park made another birdie on the 15th by making a 24 foot put, to take lead.

But shortly after, Choi also made a birdie on the same hole and the two remained tied until the 16th. As Choi hit her tee shot into the hazard on the par-three 16th, making a double, Park took a two shot lead, but her victory wasn’t a sure thing as the 18th hole was considered one of the hardest on the course.

During the 2016 U.S. Women’s Open, in which Park played as a non-LPGA tour member, Park finished third by hitting her second shot on the 18th into the hazard, finishing her round with a double bogie. 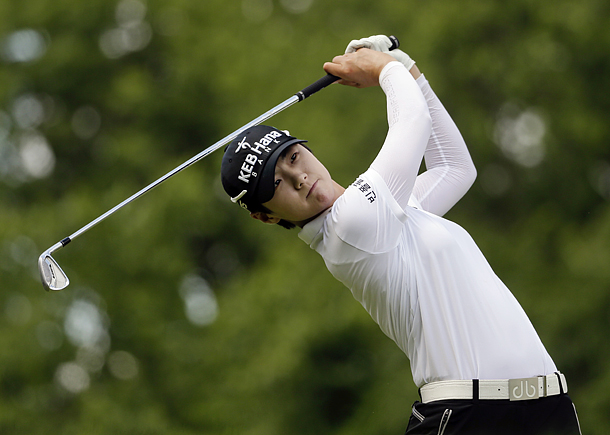 And this year, Park was in a similar situation, where she hit her third shot over the green. Though she hesitated with her chip on the 18th, Park successfully finished with a par. Not only that, Park had the second longest driving distance this weekend, at 256.13 yards.

With Park’s par on the last hole, she was able to win two shots ahead of Choi, who finished with a birdie. Since Choi is still an amateur, she had to give up her purse of $540,000.

“My goal was to compete against the world’s top professional golfers,” Choi said after the round. “I’m satisfied with a runner-up finish and I don’t care much about the prize money.”

Just as Pak Se-ri made an impression with her first LPGA tour victory at the 1998 McDonalds LPGA Championship, now the KPMG Women’s PGA Championship, Park has done so in her rookie year. Park won the purse of $900,000 and climbed all the way to second in the 2017 LPGA tour money list, right behind Ryu So-yeon. Park also became the eighth Korean to win the U.S. Open.

Unlike her success in the 2016 KLPGA tour, where she won a total of seven tournaments, on the LPGA tour, when it came to winning, Park always missed her chance. Before her victory at the U.S. Women’s Open this season, Park had three top ten finishes and hadn’t missed a cut.

Though the 2017 LPGA tour season is not yet done, Park is guaranteed a rookie of the year award, as she earned 300 points from winning the U.S. Open. With that, Park has a total of 997 points in the rookie of the year race, which is 600 points more than Angel Yin of the United States. Not only that, Park’s world ranking moved up from 11th to fifth.

Aside from the top two finishers, the leaderboard this weekend grabbed significant attention, as Korean golfers dominated the field once again. Eight of the golfers in the top ten were Korean - the other two are Feng of China and Carlota Ciganda of Spain. This is the first time in the U.S. Women’s Open history that not a single golfer from the United States finished inside the top ten.

Throughout the 72 U.S. Women’s Open, American golfers have won a total of 52 times. That said, since the tournament is hosted in the United States every year, there was never a year where no American golfers finished near the top of the leaderboard.