Police look into whether defector who returned to North was coerced

Police look into whether defector who returned to North was coerced 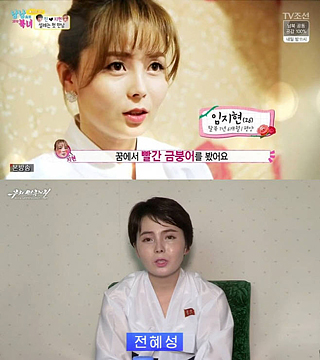 Lim Ji-hyun, who defected to South Korea in 2014, on a local entertainment show, top, before re-appearing in North Korean media, above, claiming life in the South was “hell.” [ILGAN SPORTS]

Seoul police said Wednesday they were investigating how a North Korean defector and former television celebrity here wound up back in the North, leaving open the possibility she was forced to return.

If the defector, who went by the name Lim Ji-hyun in South Korea, voluntarily re-entered the North, she may have violated the South's National Security Act.

Article 6 of the law stipulates that anyone who has entered the South from, or escapes to, an area controlled by an anti-government organization, with the knowledge that it may endanger the South Korean government or democratic order, shall be imprisoned for up to 10 years.

South Korea still considers Lim one of its nationals, since she was granted citizenship after passing a background check by the intelligence authority upon her arrival here.

She may have been forced back, according to some local intelligence officials, who say a number of defectors travel to China in order to smuggle family members out of the North, but end up getting caught themselves.

Police said they were questioning Lim’s acquaintances and looking into her financial transactions and telecommunications records.

Lim, who arrived in South Korea in 2014, was featured in an online video Sunday released by the North Korean regime’s propaganda website Uriminzokkiri, comparing life in the South to “hell.”

Introducing herself as Jon Hye-song in the 27-minute video uploaded on YouTube, she said she voluntarily re-entered North Korea last month but did not specify how. Lim said she was now living with her parents in Anju, South Pyongan Province.

From December 2016 to this April, Lim appeared in “Moranbong Club,” a talk show aired on the local cable channel TV Chosun, which features North Korean defectors, mostly females, describing their past lives.

Lim also appeared in “Man in the South and Woman in the North,” a reality show in which a South Korean celebrity and a North Korean defector pretend to be married. Kim Jin, the South Korean actor who starred as Lim’s husband, said he was “utterly shocked” about the news and thought it was “unfortunate.”

In the interview with Uriminzokkiri, Lim accused TV Chosun of forcing her to speak ill of her country, saying, “I had no other choice but to say whatever they wrote in the script and one time I was told, ‘You think it’s easy to earn 400,000 won($354)?’”

The broadcaster adamantly denied that claim and said Lim was never coerced.

“I imagined myself eating well and making a fortune once I arrive in South Korea,” Lim said in the interview, “but after going around to different places to earn money, including pubs, I came to realize life was just physically and emotionally taxing.”

In a message Lim posted on her official fan club in April, she thanked fans for throwing her a birthday party, writing that it was probably the “happiest birthday of my life.”

South Korea’s Unification Ministry, which handles inter-Korean relations, said 25 North Korean defectors have reappeared in the regime’s media over the past five years of the Kim Jong-un leadership, five of whom returned to South Korea again, including one North Korean man this year.

The ministry, however, said it did not know exactly how many defectors ended up back in the North in total, or how many of the 25 known people were forced to return.