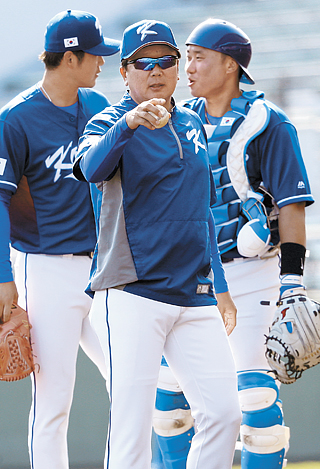 Sun Dong-yol, who served as the national baseball team’s pitching coach during this year’s World Baseball Classic, will make his debut as manager starting in November.

This means he will lead the team through the 2020 Tokyo Olympics.

“My biggest goal as manager is to win a gold medal at the 2020 Tokyo Olympics,” Sun said during a press conference Monday at the Korea Baseball Organization’s headquarters in Seoul. “Compared to the past, I think the players right now lack pride in representing the country.”

Sun is considered a legend in Korean baseball. He joined the Haitai Tigers, now the Kia Tigers, in 1985, and throughout his 10-year career as a pitcher, he picked up 146 wins and 40 losses while recording 132 saves and a 1.20 ERA.

Afterward, he became a manager in the KBO and recorded a career total of 584 wins, 553 losses and 22 ties. While Sun was managing the Samsung Lions from 2005 to 2010, the team won the Korean Series twice.

Sun concluded his managing career in 2014 with the Kia Tigers, but he was still sought after by KBO clubs whenever they were recruiting new managers. The KBO decided to make him the national team’s pitching coach during its participation in the 2006 World Baseball Classic, 2015 Premier 12 and 2017 World Baseball Classic.

Now, Sun will take the helm of a team that has failed to meet expectations in recent years.

During the first round of the 2013 World Baseball Classic, Korea was eliminated in the first round, and this year, they failed to make the round of 16. The team has been slowly losing its fan base, and the loss at this year’s Classic was especially shocking because the event was hosted by Korea.

Not only that, fans have lost trust in Korean baseball’s governing body as incidents of game fixing between referees and KBO clubs have continuously dogged the organization.

The national baseball team is hoping to play well in upcoming international tournaments to bring back the baseball heat in Korea. Their most pressing priority is the Asian Professional Baseball Championship in November.

Since only players under 24 are allowed to compete in the tournament, Sun believes it will be a good opportunity for younger players to prepare themselves for the Olympics in 2020. Currently, many of Korea’s leading players are in their mid-30s.

“At the Asian Professional Baseball Championship and Asian Games [next year], I’ll try my best to have younger players gain more experience playing in bigger events,” the coach said. “But the most important thing is the results of the players. If the veteran players continue to play well, then they will compete at the Olympics.”

Sun will announce his coaching staff in mid-August.