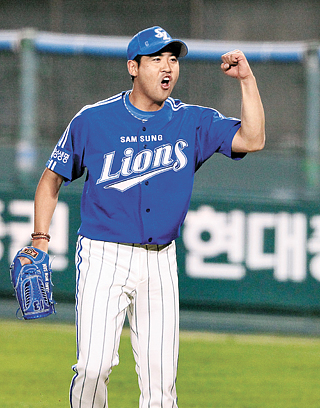 Over the past ten years, Jang Won-sam of the Samsung Lions has been a starting pitcher in the Korea Baseball Organization (KBO). In the 2012 season, Jang took home the KBO title, picking up a total of 17 wins in a single season. Though he struggled in the beginning of the season, Jang is still the Lions’ key player, taking on a role as a relief pitcher.

Since Jang first made his KBO debut, he has been known as a pitcher with better control than speed. Not only that, Jang has shown that he has what it takes to step up during big games.

Jang didn’t receive much attention when he first decided to turn professional. In 2002, while attending Yongma High School in Masan, South Gyeongsang, Jang was drafted by the Hyundai Unicorns. Rather than going directly to the KBO, Jang attended Kyungsung University and joined the Unicorns in 2006. Despite low expectations, he had a beyond impressive debut season, recording 12 wins and 10 losses with a 2.85 ERA.

Jang’s record could have been good enough to take home the Rookie of the Year title in any other season, but Ryu Hyun-jin, currently of the Los Angeles Dodgers, made his debut the same year. In 2006, Ryu had quite a season, recording 18 wins and six losses with a 2.23 ERA while playing for the Hanwha Eagles.

But that didn’t discourage Jang from playing well, as he continued his success as one of the KBO’s dominant left-handed pitchers and went to represent Korea at the 2006 Asian Games, the 2008 Beijing Olympics, and the 2009 and 2013 World Baseball Classics. Adding to his success, in 2015, Jang became the second left-handed pitcher in the KBO to pick up 100 career wins.

When the Nexen Heroes traded Jang to the Lions after the 2009 season, he became the Lions’ top left-handed pitcher, recording a total of 72 wins and 43 losses by the end of the 2015 season. During those six seasons, Jang picked up the most number of wins in the KBO.

But starting from the 2016 season, Jang started to struggle and he has failed to bounce back ever since. At the end of May, he moved into the role of relief pitcher for the team.

It wasn’t an easy transition after being a starting pitcher for ten seasons. Unlike other seasons where he prepares for about four to five days before each game, he now waits for his chance to get on the mound every day, not knowing when he will get the call.

“As a pitcher, it is definitely overwhelming to get on the mound when we’re losing because if I give up another run, then the starting pitchers’ ERA goes up,” Jang said. “It may sound obvious, but this is why I try not to give up any more runs.”

As a relief pitcher, Jang plays different roles. There are times when Jang pitches only against one or two batters while other times, he pitches long innings. As a relief pitcher this season, Jang has pitched for more than three innings for three games. In those three games, Jang recorded a 0.93 ERA, proving that he still has the energy to be on the mound.

“In the beginning of the season, I wasn’t able to help the Lions at all, not even one percent,” Jang said. “It makes me happy when I hear that the Lions have improved with my return. So I try to give it my all in the one inning I get to play in. I only think about playing well in the role that I’m given.”