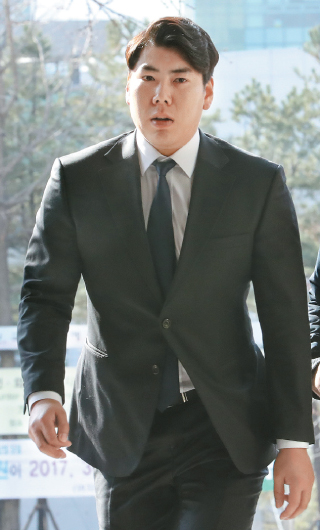 Neal Huntington, manager of the Pittsburgh Pirates, said on Sunday that it is unlikely that Kang Jung-ho will return to the United States this season.

Following his third driving under the influence charge in Korea, Kang has already missed 89 games this season. Though it was unlikely that Kang would return this season, this was the first time Huntington has clarified Kang’s absence. In addition, Huntington mentioned that the Pirates may have to plan the next season without Kang.

“That’s unfortunate,” Huntington was quoted as saying by the Pittsburgh Post-Gazette. “The situation is a result of regrettable actions. As far as 2018, we still remain optimistic that we’ll go through the process again this offseason, and perhaps the thought process or the environment will change. But we have to face the reality that it might not.”

Kang made his major league debut with the Pirates in 2015, signing a four-year contract for $11 million with an option for a fifth year. As the Pirates’ third baseman and shortstop, Kang recorded a 0.273 batting average with 202 hits, 36 home runs and 120 RBIs. During his major league rookie season, Kang finished third in the National League’s rookie of the year vote and quickly became a Pirates starting player.

Despite Kang’s success as a baseball player, starting in July 2016, he got himself in legal trouble, when he was accused of sexually assaulted a 23-year old woman. Since the accuser did not cooperate with the police investigation, no charges were made against Kang.

On Dec. 2 2016, during his offseason, Kang was arrested for leaving the scene of a DUI hit-and-run accident in Seoul. This was Kang’s third DUI, following incidents in August 2009 and May 2011.

As a result, not only was his driver’s license invalidated, but the Seoul Central District Court sentenced Kang to eight months in prison, which is to be suspended for two years, and fined him 15 million won ($13,280) in March. Kang appealed to the court, but his appeal was rejected.

Kang was not able to get a visa to work in the United States, and so was unable to play for the Pirates so far this season.

And despite a continuous battle to get Kang into the country, the Pirates seem to have finally lost hope in bringing him back to the club.

“As far as this year, it’s hard to envision a scenario where something is going to change overnight and he’s going to be able to come in here and contribute to help us win games, given the down time and where he is,” Huntington told the Post-Gazette. “Again, for next year, it’s uncertain. We’ll see how offseason plays out.”