Oh Ji-hyun won her second tournament of the season at the Hanwha Classic 2017 at Jade Palace Golf Club on Sunday. 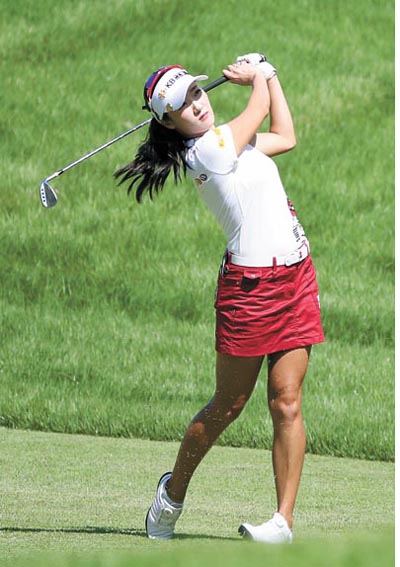 Oh Ji-hyun watches her shot during the final round of the Hanwha Classic 2017 at Jade Palace Golf Cub in Chuncheon, Gangwon on Sunday. Oh finished two shots ahead of Chung Ye-na. [YONHAP]

After a daily best round of 65, seven under par, on the third day, Oh started the final round with a four-shot lead over Chung Ye-na. During the final round, Oh shot an even-par round with two birdies and two bogeys, finishing two shots ahead of Kim Ji-hyun.

Kim got as close to two shots behind Oh with her back-to-back birdies on her last two holes, but Oh quickly responded by sticking her second shot 2 meters (6.6 feet) from the last hole.

This season, Oh has shown improvement in her shots, course management and putting. Oh’s average putting this season is ranked second on the Tour at 29.53, and fourth in scoring average at 70.72.

“I didn’t know how to transfer power to the ball,” Oh said. “Practicing on increasing head spin allowed me to hit farther and gave me easier course management.”

The Hanwha Classic is the KLPGA Tour’s second major tournament of the season and has the highest winning purse. Oh therefore won a total of 350 million won ($312,000), allowing her to jump to third on the money list. She also captured her first KLPGA Tour’s major title.

Once Oh’s victory was finalized, she thanked her father, who has been caddying for her since her KLPGA Tour debut in 2014.

“I had fun rounds of golf with my dad for the past four days,” Oh said. “He’s been a triathlete and competed in events until two years ago. He never gets lazy and looking at the way he takes care of himself, I respect him as an athlete.”

With Oh working on the course with her father, the two have now won a total of four tournaments. In addition, this is Oh’s first time winning multi-tournaments. Now that Oh has won two tournaments, in the remaining season, she hopes to win one more.

“My first goal of the season was to defend my title at BC Card - Hankyung Laides Cup 2017 in June and the next goal was to win a major tournament,” Oh said. “Since I’ve achieved both, my next goal is to win three tournaments.”