Park Byung-ho of the Rochester Red Wings Class AAA, a minor league affiliate of the Minnesota Twins, started his 2017 season with the hope of finding a spot in the major league, but that Cinderella story just didn’t happen for Park. 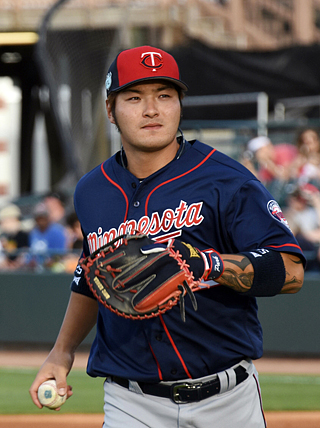 Due to the swelling of his lymph nodes and the team failing to advance to the postseason, Park Byung of of the Rochester Red Wings Class AAA, a minor league affiliate of the Minnesota Twins, concluded his 2017 season. [YONHAP]

During the Red Wings’ last game of the season, Park was unable to compete due to the swelling of his lymph nodes. And since the Red Wings lost in the tie breaker for the wild card against the Lehigh Valley IronPigs, Park’s 2017 season has come to an anticlimactic end.

“I’ll have to try my hardest in the spring training exhibition games,” Park said before departing to the United States on Feb. 2.

Despite Park’s desire to put in his best effort, two days after his arrival the Twins said Park would “be designated for assignment,” and so Park immediately had to make his way to the minor league.

Throughout the spring training exhibition games, played under invitation, Park performed above expectations, with a 0.353 batting average with six home runs and a 0.745 slugging average. His statistics were ranked first among the Twins’ players, but in the end, the team chose not to include him in the 25-man roster because they needed to strengthen their bullpen.

While in the minor league, Park played in a total of 111 games for the Red Wings and recorded a 0.253 batting average with 14 home runs and 60 RBIs, but was never once called-up to the big leagues. Though Park had to miss a few games due to injuries, looking at the statistics, he might have expected to be called up at least once, as his biggest competitor Kenny Vargas - who had a marginally better record than Park - got called up quite a few times.

But Park’s statistics weren’t outstanding. He was given 28 walks and was struck out 103 times, more than four times the number of walks. The high number of strike outs was considered Park’s weakness, as he had a total of 80 strikes out while getting 21 walks in the big leagues during the 2016 season.

This was one of the reasons Park was demoted to the minor league in 2016, even after hitting 12 home runs.

“It seemed as if he was going to play really well based on his performance in the spring training exhibition games,” said Song Jae-woo, MBC Sports Plus analyst and a Major League specialist. “He wasn’t consistent and after Terry Ryan [former manager of the Twins who recruited Park] left the team, it seemed like he was excluded from the roster.”

With the major league starting their entry expansion in September, if Park isn’t called up by the Twins his season will end. But based on the Twins’ call up this season, foreign media also doesn’t think Park has much of a chance of receiving the call.

Since Park signed a major league contract with the Twins for four-years at $12 million in 2015, he will have to stay with the team for the remainder of the contract. If he decides to return to the KBO, Park will only be able to join the Heroes as he is not yet a free agent.