Dodgers lose to Nationals as Ryu picks up a no-decision

Dodgers lose to Nationals as Ryu picks up a no-decision

Ryu Hyun-jin of the Los Angeles Dodgers has picked up another no-decision despite a solid outing, getting pulled just one out shy of qualifying for a win. 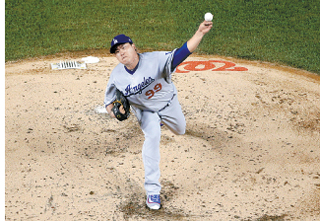 Ryu Hyun-jin of the Los Angeles Dodgers pitches during the game against the Washington Nationals at Nationals Park on Sunday. [AP/YONHAP]

The Korean left-hander tossed 4 2/3 scoreless innings against the Washington Nationals at Nationals Park in Washington on Sunday (local time). He cruised through four innings, but nursing a 1-0 lead with two outs in the bottom fifth, Ryu walked the final two batters he faced before Ross Stripling came in to clean up the mess.

Stripling escaped the inning unscathed but gave up a three-run home run to Ryan Zimmerman in the sixth, as the Nationals rallied for a 7-1 win.

Ryu remains at 5-7 this year, his first full season back from a shoulder operation in 2015. He lowered his ERA from 3.59 to 3.46, after striking out five and allowing three singles.

This was Ryu’s first start since Sept. 5, when he held the Arizona Diamondbacks to an earned run over six solid innings in a no-decision. Ryu is trying to earn a spot in a deep Dodgers’ rotation for the postseason. The Dodgers have the luxury of six healthy starters now, with Clayton Kershaw, Yu Darvish, Rich Hill, Alex Wood, Kenta Maeda and Ryu.

Before his latest start, Ryu carried the best second-half ERA on the Dodgers’ staff with a 2.60 mark in eight starts.

Ryu retired the side in order in the first inning on three fly balls. He worked around back-to-back one-out singles with a strikeout and a groundout.

He struck out three more batters and held the Nationals to a single over the next two innings, but the crafty lefty got into trouble in the fifth without allowing a hit.

No. 8 hitter, Matt Wieters, battled Ryu for 11 pitches before striking out swinging. Then the Nationals’ starter, Stephen Strasburg, worked a nine-pitch walk, and Ryu was suddenly struggling with his command.

Ryu walked the next batter, Trea Turner, on six pitches, and that was more than enough for Dodgers manager Dave Roberts, who summoned Stripling to finish the inning.

Ryu threw 98 pitches for the game, 30 of them in the fifth inning alone.

Stripling got Jayson Werth to fly out to center to preserve the 1-0 lead, but Zimmerman touched him for a three-run bomb in the bottom sixth to put the Nationals up 3-1.