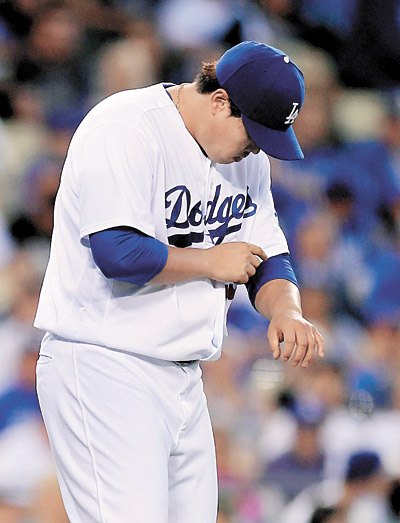 Ryu Hyun-jin of the Los Angeles Dodgers watches his left forearm after getting injured by Joe Panik’s hit at the top of the third inning during a game against the San Francisco Giants at Dodgers’ Stadium on Saturday. [AP/YONHAP]

Ryu Hyun-jin, the Korean pitcher gunning for a spot on the Los Angeles Dodgers’ postseason roster, saw his chances slip over the weekend when an injury on his left forearm caused the southpaw to make an early exit from a game against the San Francisco Giants on Saturday. The Dodgers lost the game 2-1.

A week before the game, Dave Roberts, the Dodgers’ manager, mentioned that Ryu and fellow pitcher Kenta Maeda would be auditioning for spots in the postseason bullpen. Roberts’ statement suggested Ryu had failed to get into the starting roster and needed to prove himself to play in the postseason, at least in the bullpen.

The game against the Giants on Saturday seemed like that opportunity. Ryu started the game for the Dodgers but left the mound after the third inning, giving up three hits and one run before he was knocked in the forearm by a 94-mile-an-hour hit by Joe Panik.

The Dodgers managed to convert Panik’s hit to an out, but Ryu was unable to continue. With pain in his forearm, Ryu was substituted by Ross Stripling. From the three innings, Ryu’s ERA slightly went up from 3.46 to 3.47.

For the remainder of the game, Ryu was regularly caught on camera checking his left forearm.

“I’ve never been struck in the arm before in my career, but since there’s no structural damage, I should be able to recover soon,” Ryu was quoted as saying on Yonhap. “I don’t know if I’ll have another chance to pitch again this season [with seven games remaining]. I just have to be ready to pitch as soon as I can.”

The game against the Giants may not have had much meaning for the Dodgers, as the team finalized its berth in the postseason and clinched the National League West title after defeating the Giants 4-2 a day earlier, but for Ryu, it was a last-ditch opportunity to try for a spot on the Dodgers’ postseason starting rotation.

“Obviously, I’d like to be in the starting rotation because I’ve been a starter all along,” Ryu was quoted as saying on Yonhap.

If Ryu had broken his arm, he would have been done for the season, as the minor league’s regular season has ended already. Since it is a light contusion, he’s expected to recover just by resting his arm.

But regardless of the seriousness of an injury, it is almost impossible for Ryu to get on the starting rotation for the postseason. To guarantee his spot, Ryu had to show his best performance during the game against the Giants, as he had to prove to Roberts that he was better than the other pitchers in contention.

Instead, the Dodgers will likely head into the postseason with four starting pitchers: Clayton Kershaw, Yu Darvish, Alex Wood and Rich Hill in that order.

Since Roberts has high expectations for Darvish, Ryu doesn’t have much space for himself in the current rotation. The Dodgers will have to use Darvish as one of their starters after trading away Willie Calhoun to bring in Darvish from the Texas Rangers.

With all this in mind, Ryu will likely be assigned to relief pitcher alongside Maeda in the postseason.