The Korea Professional Baseball Players Association (KPBPA) on Wednesday called for revisions to a recent rule introduced to allow players to have representation starting next year. 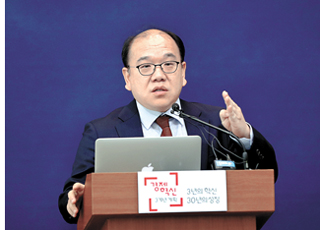 The KPBPA welcomed the decision by the Korea Baseball Organization (KBO) to permit agents to represent its players beginning in 2018, putting into effect a rule that was initially written in 2001.

The interest group will be responsible for running qualification tests for those hoping to work with KBO players. The association, however, raised issue with one caveat with the rule: that each agent or agency may only work with a maximum of 15 players and with no more than three players from the same club.

“If you limit the players’ rights to choose, it may leave young players or those with lower salaries at a disadvantage,” the KPBPA said in a statement. “It could affect the market for agents or the sports industry as a whole. We’ll try to persuade clubs to remove this unreasonable element of the rule.”

The KPBPA will post further details on qualifications for KBO agents on its website by today and will hold a seminar on the issue in early October.

For each player contract signed, agents may not take more than 5 percent in commissions.

In February last year, the government said it would encourage athlete representation in domestic professional sports, saying the absence of proper representation has hindered the development of management, marketing and public relations within the sports industry.

Currently, a KBO player must directly deal with his club in contract negotiations, and no other representative is permitted to sign a contract for the player.

The KBO agreed in 2001 to allow players to have representation but had been withholding the formal introduction of this system, citing the need for discussion among the KBO, its clubs and the players association regarding the league’s circumstances.

Previously, the KBO has been wary of the negative impact of having agents handle contract negotiations. Its officials have said agents could drive up players’ salaries and affect clubs’ bottom lines. They also feared the risks of having only a few super agents dictating the whole market.

In December 2014, the Seoul Bar Association filed a complaint with the Fair Trade Commission that the KBO had violated anti-monopoly and fair trade laws by not putting an agent system into effect. The lawyers’ group argued that it was inherently unfair for the KBO to allow only players to enter contract negotiations when they have little leverage or legal knowledge.

Proponents of having agents for players have said the system will have positive long-term effects on KBO clubs. Since agents will be coming to negotiating tables armed with statistics, it will also force teams to accumulate numbers and facts, and determine players’ wages with more objective data, they said.