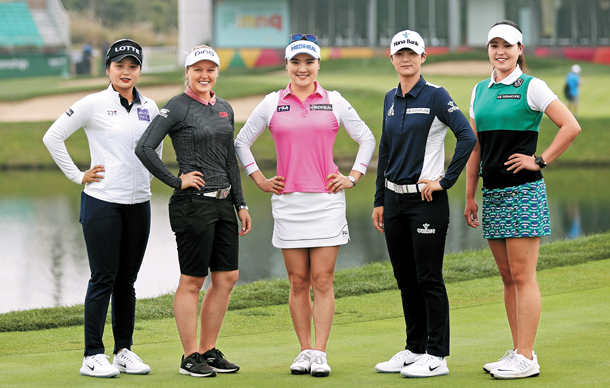 Three of the brightest stars in women’s golf today will take their battle to Korea this week, as the LPGA Tour makes its lone annual stop in the country.

The LPGA KEB Hana Bank Championship will begin Thursday at the Ocean Course at Sky72 Golf & Resort, situated next to Incheon International Airport. The Ocean Course is hosting the tournament for the 10th consecutive year.

The strong field of 78 players features nine of the top 10 players on the women’s golf rankings. And the top three - Ryu So-yeon and Park Sung-hyun of Korea and Lexi Thompson of the United States - will look to add another chapter to their rivalry this week.

In addition to the world rankings, they’re also jostling for positions in other major statistical categories.

Park, a rookie sensation at 24, is the money leader at a little over $1.9 million, followed by Ryu at $1.78 million and Thompson at $1.66 million. Thompson is closer to Park than she is to the fourth-highest earner this year, Brooke Henderson of Canada.

Ryu, world No. 1 since June 26, also leads the Player of the Year points race with 150, but Thompson is only three points back with five tournaments remaining after this week. Park is in third place with 130 points.

Players earn 30 points for each victory, 12 points for finishing second and nine points for coming in third, and so forth.

Thompson leads the tour in scoring average with 69.015 strokes per round. Park is in second place at 69.092 strokes on average per round. Ryu is further back in sixth place.

Ryu, Park and Thompson each have two victories this year, though Ryu and Park have also each won a major, while Thompson was shut out.

At a pre-tournament press conference Tuesday, Ryu said she feels well-rested after three weeks off and she’s looking forward to competing in front of home fans.

“It’s exciting to be back out on the course, and it makes it even more significant to make my return to the tour in Korea,” Ryu said. “I am feeling great, and I am looking forward to some great golf this week.”

Park, on the other hand, enters this tournament on a bit of a down note. She struggled badly in the final round of the Evian Championship, the season’s last major, in September in France, and also struggled at a Korea LPGA (KLPGA) event later that month.

Park apologized to her Korean fans for her recent poor showings but said she’s ready to bounce back.

“I feel very relaxed and comfortable to be playing at home,” she said. “I was really down on myself for the past couple of weeks, but I made some good shots in the practice round yesterday. So I have high expectations for myself.”

Thompson is the 2015 champion of the KEB Hana Bank Championship. Park finished runner-up that year.

Ryu, Park and the rest of the Korean contingent have had a monumental season in 2017. Heading into this week’s tournament, Koreans have combined for 13 wins in 27 tournaments, including three of the five majors.

One of the winners, world No. 8 Kim In-kyung, is the only three-time champion on the tour this season. World No. 7 Chun In-gee, the 2016 Rookie of the Year and two-time major champion, will also try to make some noise.

Chun has stayed inside the top 10 in the world rankings despite not picking up an LPGA win this year. She has instead had five runner-up finishes.

Chun said she at times hasn’t been able to enjoy the game as much as she would like, and she wants to change that here this week.

“I am thrilled to be reunited with my fans here, because this is my first tournament in Korea in 2017,” she said. “I think just how much fun I have playing before these fans will be a measure of my success this week.”

Choi Hye-jin, a teen phenom who finished runner-up at the U.S. Women’s Open as an amateur, will be competing as a pro. She earned a sponsor’s exemption for this tournament. A little over a month after turning pro, Choi is already ranked No. 18 in the world.

“It’s an honor for me to be here as a rookie, and I am grateful for the invitation,” Choi said. “I won’t try to do too much here. I’ll just focus on building experience and getting better each day.”