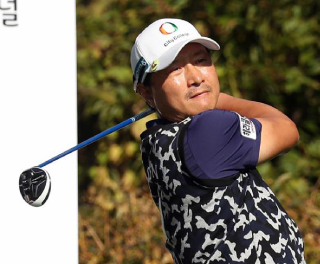 Hwang In-choon watches his shot during the final round of KJ Choi Invitational at Jeongsan Country Club. [YONHAP]

Hwang, who started the final round four shots behind the leader, Jung Hanm-il, was a sole leader heading onto the par-4 18th hole. But with a bogey on the final hole, Hwang shot one under par for a three-way tie against Kang Sung-hoon and Michael Choi. After Choi lost in the second playoff hole, Kang and Choi were forced to play two additional holes.

Despite the yardage difference, Hwang responded with great putting, finishing with pars, while Kang continued to miss birdie putts. Kang was given a chance to win in the second playoff hole, after sticking his second shot 10-feet from the hole, but barely missed the putt and had to end with a par. Choi was eliminated on that same hole by making a double-bogey.

After another par on the third playoff hole, both Kang and Choi missed their tee shots on the fourth playoff hole. Kang’s ball went to the other hole and Hwang’s landed in the bunker. As Kang missed his 5-foot-putt par and Hwang made his, Hwang became the second player over 40 years of age this season to win a tournament.

“I had some expectation this season with better shots, but I didn’t expect to win,” Hwang said after the playoff. “I still can’t believe it.”

Kang, who played in the KPGA Tour event for the first time since the Kolon Korea Open in October 2013, made a strong comeback in the final round, shooting six under par to move up 18 spots and finish as the runner-up.

As host and a participant, Choi Kyoung-ju finished the tournament tied at 28th, shooting one over par in the final round to finish the weekend at two under par.

The KJ Choi Invitational, which started in 2011, marked its sixth year this year. In 2015, the tournament had to be cancelled due to losing its sponsor, but resumed last year with its new sponsor, Hyundai Insurance.

Choi has focused on making the course setting more difficult, and though Choi said it would be difficult to see two-digit-under-par scores, five players managed to shoot 10 under par or better this weekend.

“The course was in great condition and the players seemed confident at impact,” Choi said. “Players have gotten a lot better compared to three years ago.”